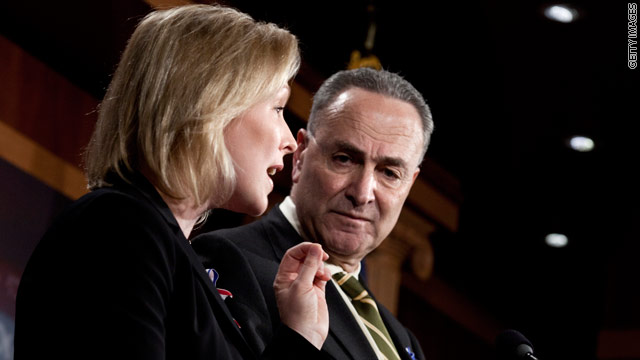 WASHINGTON (CNN) - Senate Democrats said they were hopeful they had pulled off "a Christmas miracle" by gaining enough votes to pass a health care bill benefiting 9/11 rescue workers.

Long-time champion of the bill, Sen. Charles Schumer, D-New York, said in the past 48 hours Democrats had retooled the measure to gain Republican support. He said Democrats would introduce the bill after the last vote on the START nuclear arms treaty, which has occupied the Senate for several days.

"Barring a setback, we believe we're on the path to victory by the end of this week," Schumer said.

He said Majority Leader Harry Reid, D-Nevada, promised he would bring the bill to the floor.

"We don't know exactly when that will occur - that's often up to our Republican colleagues - but we're next," Schumer said.

The bill would provide more medical care for 9/11 rescue workers, many of whom sifted through the rubble of the World Trade Center looking for bodies, and who were exposed to harmful toxins.

Schumer joined fellow Democrat Kirsten Gillibrand, D-New York, who called the announcement "a Christmas miracle" for the bill, which in the past has failed to muster enough Republican support.

Gillibrand said the bill's sponsors changed the way the health care fund would be paid for and cut its total cost in response to Republican concerns.

Instead of coming with a $7.4 billion price tag, the bill will now cost $6.2 billion over 10 years, after a court settlement that benefited some of the responders.

The senators also changed how the bill will be funded. The $6.2 billion will come from a procurement fee on some foreign countries that trade with the U.S., the continuation of a fee on some travelers to the U.S. and a fee on visas for some companies.

Schumer admitted there were several hurdles to passing the bill, including perhaps the most daunting, convincing his House colleagues to remain in Washington to take up the bill after the Senate.

"I think there's going to be huge pressure on people not to go home until we do this," Schumer said. "We believe that they should stay to get the bill passed. We are going to get it done as quickly as possible."

Senators have a long to-do list to finish before breaking for Christmas. In addition to resolving the debate over the START treaty, they also need to pass a funding bill that would keep the federal government running into 2011.