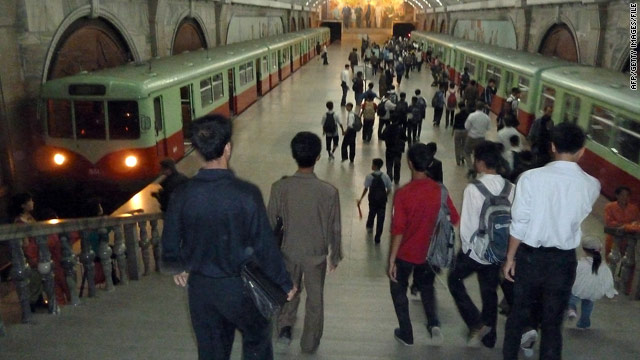 Pyongyang, North Korea (CNN) – I just came back from a subway ride in downtown Pyongyang. They took us really deep underground. The escalator seemed to go on forever, deeper than I've ever been - certainly much deeper than the Metro in Washington, DC - as we went from Prosperity station to Glory station.

It was clear to me the subway system doubles as an underground shelter. The people here are very conscious of the military situation in North Korea, and certainly now with the escalating tensions on the Korean peninsula.

The subways were packed, and we got great pictures which we'll show you when we can. I was curious how much people have to pay for subway fare, and they told me you could get a six-month pass with unlimited use for the equivalent of one U.S. dollar. When you go down the escalators you hear a lot of patriotic music through the speakers and you see a lot of murals and paintings showing heroic efforts by the men North Koreans call the Great Leader, Kim Il Sung, and the Dear Leader Kim Jong Il. There are also a lot of paintings and murals of people in factories and soldiers with weapons fighting for the defense of the country. Indeed wherever you go in Pyongyang that's what you see.

I did have one fun moment on Sunday when I was driving around and spotted a bunch of young women in white athletic suits jogging. I asked the driver to stop, I went out, and it turned out to be the North Korean women's ice hockey team. I went running with them for a few minutes. The sun had come out, it had gotten a little warmer and the girls thought it was pretty funny that I would jog along with them outside the national ice skating rink. I had a handheld video camera, and I was shooting as I was running, so hopefully I got some good pictures.

Earlier on Sunday morning, I took a stroll down the banks of the Potong River right in the heart of the North Korean capital, and it was quiet; fathers and daughters walking together, young boys playing, lots of people on bikes. It seemed very peaceful and pleasant; you wouldn't have known at that moment that this Korean peninsula faced the worst crisis since the 1953 armistice that ended the Korean war.