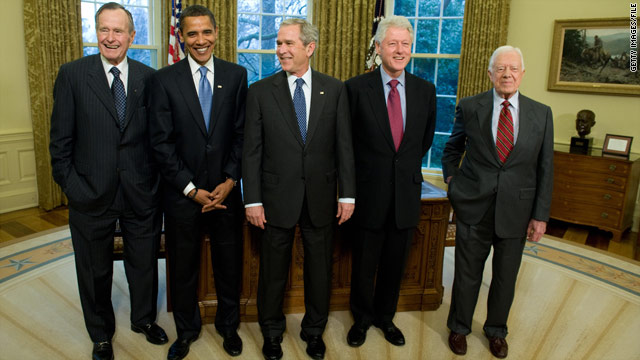 CNN Poll: How Obama stacks up against predecessors

Washington (CNN) - As President Barack Obama ends his second year in office, a new national poll indicates that just under half of all Americans approve of the job he's doing in the White House, lower than most of his recent predecessors at the same time in their first term in office.

According to a CNN/Opinion Research Corporation survey released Monday, the public is split on how Obama has handled his duties, with 48 percent saying they approve and an equal amount saying they disapprove.

President George W. Bush had an approval rating of 63 percent in December of 2002 - the end of his second year in office - as did his father, President George H.W. Bush, in 1990. The elder Bush lost his re-election bid two years later while his son was successfully re-elected in 2004 to a second term.

President Bill Clinton, whose party lost control of both houses of Congress in the first midterm election of his presidency, stood at 54 percent at the end of his second year in office at the end of 1994. Clinton went on to win re-election two years later.

Ronald Reagan, whose party also suffered major losses in his first midterm, had an approval rating of just 41 percent at the end of 1982, two years into his first term. Reagan rebounded to win a landslide re-election in 1984.

"An approval rating is a pretty unreliable indicator of the president's chances of getting re-elected, at least this far out from the next election," says CNN Polling Director Keating Holland. "In Obama's case, for example, a significant number of Americans disapprove of his track record because he has not been liberal enough. Those people may stay at home on election day in 2012, but they're probably not going to vote for a Republican. So the 48 percent who disapprove of Obama does not mean that 48 percent will vote against him two years from now."