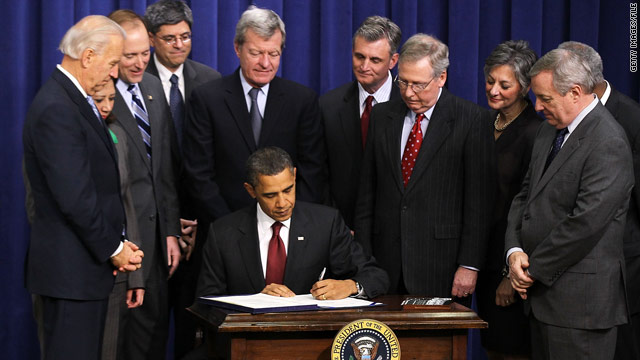 Washington (CNN) - Most Americans like the new tax cut law that President Barack Obama signed into law on Friday, according to a new national poll.

And a CNN/Opinion Research Corporation survey released Monday also indicates that while the tax cut compromise the president struck with congressional Republicans didn't spark Obama's overall approval rating, it may have given him a boost as "Triangulator in Chief."

Forty-eight percent of people questioned in the poll say they approve of the job Obama's doing in the White House, with an equal amount saying they disapprove of how he's handling his duties.

"The president's approval rating is exactly where it was in mid-November before he brokered the tax cut compromise that angered some liberals and conservatives alike," says CNN Polling Director Keating Holland. "But while he has lost some ground with liberals, he has gained support among moderates. That's important if Obama plans to borrow a page from former President Bill Clinton's playbook and try to win re-election by 'triangulating' between the leaders of both parties on the Hill."

The survey does indicate a slight deterioration among liberals, who generally opposed the tax cut compromise because it extended for two years the Bush-era lower income tax rates for the highest earners and because of a a revival of the estate tax at a lower level, which benefits the wealthy. The president's approval rating among self-described liberals dropped from 79 percent in November to 72 percent.

At the same time, Obama's approval rating improved among moderates - from 55 percent in November to 60 percent now. "That gain among moderates helped offset the drop among liberals," Holland notes. "And that's what 'triangulation' is all about - taking a hit among your base voters in order to improve your standing with swing voters who are more
likely to vote for your opponent."

Fifty-one percent say that the GOP's policies will move the country in the wrong direction, which could serve as a sobering reality check for Republicans who just last month won back control of the House of Representatives and trimmed the Democrats majority in the Senate.

"Since the GOP just picked up 63 seats in the House, what's not to like about their policies? The tax bill may be a good place to start," says Holland.

According to the poll, 56 percent of the public say that the bill does too much for wealthy Americans and six in ten don't like extending the tax cuts for families making more than $250,000 or the changes in the estate tax. And less than one in four believe that their personal situation will improve as a result of the tax bill. Only four in ten favor an increase in the federal deficit to pay for tax cut compromise.

But despite those figures, three-quarters of all Americans approve of the tax bill overall, including the extension of jobless benefits for the long term unemployed.