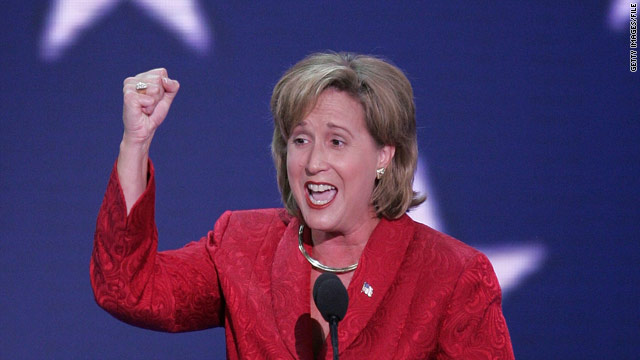 Wagner urges RNC rivals not to back Steele

Washington (CNN) - Ann Wagner, one of six candidates seeking the chairmanship of the Republican National Committee, is promising not to support Chairman Michael Steele under any circumstance if she happens to come up short in her bid to lead the organization.

The former Missouri GOP Chairwoman and onetime Ambassador to Luxembourg told CNN Monday that she will "absolutely not" endorse Steele or tell her supporters to do so if she fails to make it to the final round of what is likely to be a multi-ballot election come January.

The most recent RNC election, in January 2009, lasted through six rounds of balloting before Steele was declared the winner. Along the way, the losers cut deals and endorsed candidates who were perceived to have momentum.

Wagner called on her rivals not to back Steele if history begins to repeat itself. "I would ask any of the candidates out there to not to move any of their support to Michael Steele, regardless of the outcome of any one individual," she said.

While affirming that she is "in the race to win it," Wagner said numerous committee members have, in the course of their conversations, asked her not to back Steele if she fails to advance to the late stages of the election.

"I have made that commitment to many of the men and women who have asked me that," Wagner said. "They want a new direction, a new leadership. That's my commitment."

Also Monday, Wagner picked up the backing of two West Virginia committee members - Jim Reed and Donna Lou Gosney - meaning she can now officially be nominated for the chairmanship.

Each state is represented on the RNC by three people: the state GOP chair and two national committee members. To stand for the chairmanship, a candidate must count on two-thirds support from three different states. Wagner has now crossed that crucial threshold in West Virginia, Tennessee and her home state of Missouri.

Cino also earned a burst of momentum over the weekend by announcing endorsements from New York GOP Chairman Ed Cox, Delaware committeewoman Priscilla Rakestraw and Minnesota committeewoman Evie Axdahl. The RNC members are the first to publicly line up behind Cino.