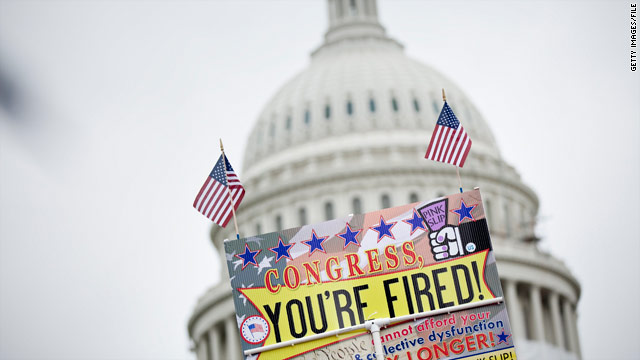 Washington (CNN) - As Congress races to the wire to approve a temporary spending bill to keep the government open for business, a new national poll indicates that if a legislative impasse shut down the federal government for a few days, most Americans would take it in stride.

But a CNN/Opinion Research Corporation survey released Tuesday also indicates it might be a different story if the shutdown lasted for a few weeks.

Read Full results after the jump:

The current measure funding the government, a so-called continuing resolution that was passed Friday, is set to expire Tuesday at midnight.

"It's not a purely hypothetical question; Congress must agree to some sort of legislation in order to keep the government up and running - and if history is any guide, the specter of a government shutdown may loom over the 112th Congress as well," says CNN Polling Director Keating Holland.

But the poll suggests it's another story if the government were shut down for a few weeks. One in three questioned would see that as a crisis and another 38 percent would view it as a major problem. Only about a quarter would consider it a minor problem or not a problem at all.

"In 1995, when a dispute between Bill Clinton's Democrats and Newt Gingrich's Republicans led to a temporary shutdown, More than half the country considered it a crisis (12 percent) or a major problem (44 percent)," adds Holland.

The framework for a deal to fund the government into March of next year appears to be in place for congressional passage this week. With Republicans taking control of the House in January and pledging spending cutbacks, a March deadline would set up a full-fledged fight over the budget.

While a continuing resolution puts government spending on autopilot, the version under consideration does include some adjustments to spending levels, including the two-year freeze in pay for federal workers that President Obama called for in November.