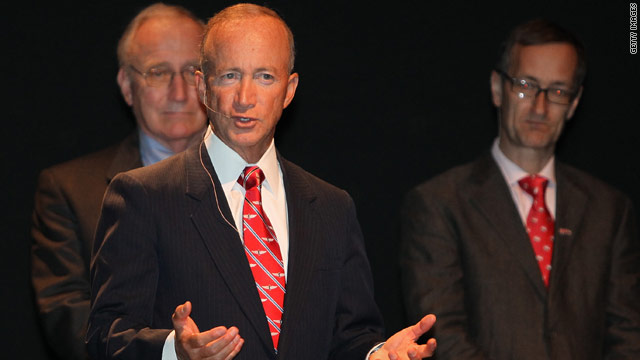 In a letter to Clark and members of the Republican State Committee on Monday, Daniels "enthusiastically" recommended his adviser Eric Holcomb for the job, all but guaranteeing that Holcomb will become the party's next chairman.

"Since 2003, I have worked with Eric to grow our party, establish our vision for the future and enact our shared policies and priorities," Daniels wrote. "As a leader in each of my campaigns, Eric has established his credentials as a coalition builder who can raise money, devise strategy, communicate a positive vision and win elections."

He added: "I encourage you to ratify Eric Holcomb as our next chairman without delay."

When Clark announced last week that he planned to step down from the chairmanship at the end of this year, several Republican players in the state signaled their interest in the post. But Indiana GOP insiders admitted that any candidate with Daniels' blessing would immediately clear the field.

Daniels is a wildly popular figure among Indiana Republicans and that isn't likely to change in the near future, but installing Holcomb as chairman ensures that the governor will be able to wield influence within the state party even after leaving office in January when his second term expires.

The move comes as Daniels is considering a 2012 presidential bid. Hoosier State Republicans said Tuesday that Holcomb's new job should not impact his ability to work for Daniels, should he decide to run.

"Eric has always been a key member of Mitch's team. If the governor does decide to run for President, Eric will be intimately involved in some role," one Indiana GOP strategist told CNN.