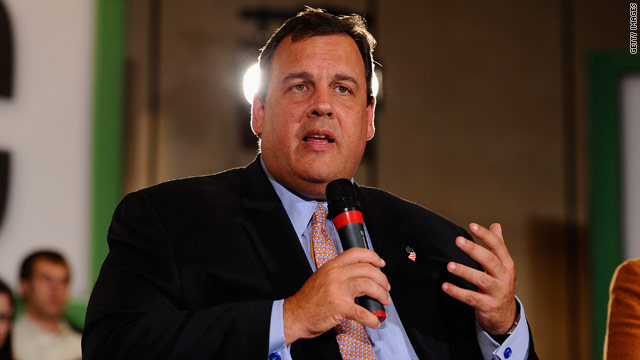 (CNN) - As Gov. Chris Christie finishes up his first year in office, a new poll indicates New Jersey voters are split on their at-times blunt, in-your-face-style governor, who has become extremely popular among Republicans nationwide.

According to a Quinnipiac University survey released Tuesday, 46 percent of Garden State voters approve of the job Christie's doing as governor, with 44 percent saying they disapprove. Christie's approval rating is down 5 points from November, with his disapproval up 6 points from last month.

The poll indicates a partisan divide, with nearly three quarters of Republicans approving of the job Christie's doing while nearly two-thirds of Democrats give him a thumbs down. By a 48 to 41 percent margin, independent voters say they approve of how Christie's handling his duties.

"Overall, New Jersey Gov. Christopher Christie still gets a split decision. Democrats don't like him at all; Republicans like him a lot. His 'Jersey-guy' in-your-face governing style? An even split," says Maurice Carroll, director of the Quinnipiac University Polling Institute.

Last year, Christie pulled off an upset victory over Democratic Gov. Jon Corzine. Since his election, he has drawn national attention for pushing budget cuts through a Democratic state legislature.

The poll indicates that nearly eight out of 10 New Jersey voters say most politicians act based on what's popular, but 64 percent say that Christie acts on principal rather than what's popular.

Despite lots of chatter, New Jersey Gov. Chris Christie keeps saying he won't run for president in 2012, and a new poll suggests that's just fine with people in his state.

According to a Quinnipiac University survey conducted last month, more than six in ten say Christie would not make a good president, and two-thirds said that speculation over a possible Christie bid is just political gossip.

The Quinnipiac University poll was conducted December 14-19, with 1,276 New Jersey voters questioned by telephone. The survey's sampling error is plus or minus 2.7 percentage points.