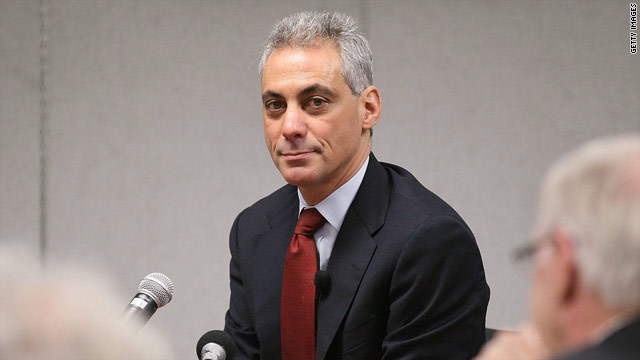 (CNN) – A new poll of Chicago voters suggests former Obama top-aide Rahm Emanuel is well on his way to becoming the next mayor of the Windy City.

According to the survey conducted by the Chicago Retail Merchants Association, the former White House chief of staff is leading his closest competitor by more than 30 points. Emanuel registers 44 percent of support in the poll of likely voters, far ahead of lobbyist Gerry Chico at 12 percent.

Five other candidates come in at single digits and 16 percent of voters remain undecided. The poll surveyed 2,239 likely voters by telephone and carries a sampling error of 2 percentage points. The CRMA has not endorsed a candidate in the race.

But camp Rahm can't pop the champagne just yet. Emanuel is still dealing with the possibility the Chicago Board of Elections could rule him ineligible to run for mayor based on the city's residency requirements.

The city mandates mayoral candidates to have lived there for at least a year. Emanuel maintained a Chicago residence when he was White House Chief of Staff but leased it out – a fact opponents say should disqualify him from eligibility. Lawyers for Emanuel have countered that the ex-Obama aide continued to store valuable items on the property after he moved to Washington in 2009 – a sign he still considered it to be a residence.

Chicago lawyer Joseph Morris mediated a three-day hearing on the issue and is expected to make a recommendation to the Election Board Wednesday. The Election Board panel will then vote on the matter Thursday. The election is scheduled for February 22.