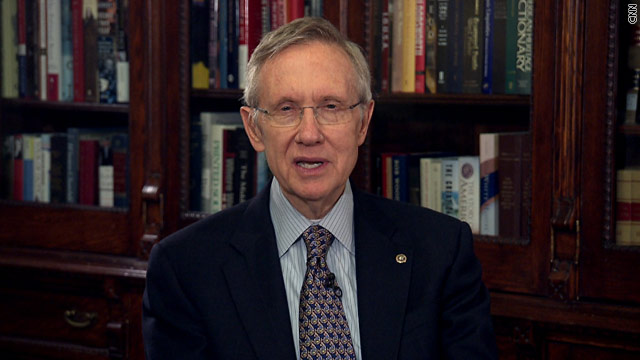 (CNN) - In a rare interview, Senate Majority Leader Harry Reid previewed the next Congressional session and hyped a productive lame-duck session that included a bipartisan tax deal, the repeal of the "don't ask, don't tell" policy, passage of the New START and a bill to provide medical care to rescue workers sickened from their work at ground zero.

"I think you saw in this very short congested work period we had is Democrats and Republicans were working together," the top Senate Democrat said Wednesday on CNN's "John King, USA." "We accomplished a lot of stuff and we did it because we worked together."

Click to watch video
Reid said the midterm elections, in which Democrats suffered significant electoral setbacks, proved the American people wanted "us to work together." However, Reid was noticeably absent from negotiations between the White House and members of Congress that resulted in an extension of the Bush-era tax cuts and a 13-month extension of unemployment benefits.

The four-term senator from Nevada said although he was invited to many meetings, it was his decision to stay out of the negotiations.

"I was not iced out," Reid told CNN Chief National Correspondent John King. "I made a decision that these negotiations were something that I thought the president should do on his own. I did not want to go to my caucus and tell the caucus I'd agreed to these tax cuts for rich people."

However, Reid said he's satisfied with the ultimate package.

When the Senate reconvenes in January the House will be under Republican control and there will be five fewer Democratic Senators, a reality that has the potential to create more legislative gridlock. But Reid said he's looking forward to working with Republicans to pass appropriation bills, address energy legislation and tackle comprehensive immigration reform.

"I think that we're going to be obligated to make sure that (Senate Minority Leader) Mitch McConnell believes he's part of the process," Reid said. "Divided government does not mean you can't get things done. Legislation is the art of compromise. And when you have divide government, that's when you have to compromise."