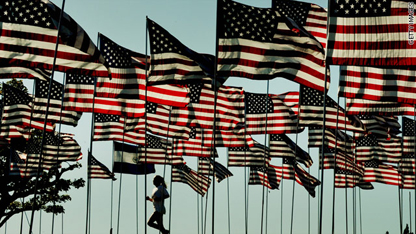 For the latest political news: www.CNNPolitics.com

CNN: Governor Vows to End Birther Controversy
Hawaii Governor Neil Abercrombie vowed to end the "birther" controversy surrounding President Obama's nationality once and for all. Abercrombie, a newly-elected Democrat, told CNN that he will do whatever it takes to prove once and for all that Obama was born in Hawaii.

Wall Street Journal: Obama's Budget Delayed a Week
President Barack Obama's budget proposal for fiscal 2012 will be released in mid-February, a little more than a week after its planned release date. The administration is scrambling to assemble what could be a pivotal document following a six-week delay in the confirmation of the White House's new budget director, a senior administration official said Monday.

Washington Post: Obama administration steps up monitoring of banks that miss TARP payments
The Obama administration has begun monitoring the high-level board meetings of nearly 20 banks that received emergency taxpayer assistance but repeatedly failed to pay the required dividends, according to Treasury Department officials and documents. And it may soon install new directors on some of their boards. The moves come as the number of banks that failed to make at least one dividend payment to the government rose to 132 in the last quarter.

New York Times: Earmarks Ban May Loom, but Lawmakers Find Ways to Finance Pet Projects
No one was more critical than Representative Mark Steven Kirk when President Obama and the Democratic majority in the Congress sought passage last year of a $787 billion spending bill intended to stimulate the economy. …Though Mr. Kirk and other Republicans thundered against pork-barrel spending and lawmakers’ practice of designating money for special projects through earmarks, they have not shied from using a less-well-known process called lettermarking to try to direct money to projects in their home districts.

CNN: President Obama supportive of second chance for Michael Vick
President Obama believes in second chances. The president recently called Philadelphia Eagles owner Jeff Lurie and, during the conversation, the two discussed Michael Vick and the fresh start the quarterback has received while at the team, according to the White House.

Politico: In tough times, Haley Barbour flies high
The Mississippi state plane, a zippy Cessna Citation with a capacity of 12, is a model favored by corporate executives and the wealthy, and its principal passenger, Gov. Haley Barbour, might easily be mistaken for one of them when he arrives with a small entourage at airports in Washington, Las Vegas or New York, a car and driver waiting there at their disposal. Barbour has traveled extensively on the jet, brushing off suggestions from Mississippi Democrats that he give it up in favor of a more modest propeller plane for his travel. The trips, according to a POLITICO review of the Cessna’s flight manifest since 2007, have mixed state business with both pleasure and national politics.

Roll Call: DCCC Targeting Marginal Districts in 2012
As the 112th Congress gets set to open, the Democratic Congressional Campaign Committee has already begun strategizing for 2012 as it seeks to cut into the new Republican House majority. Democrats are weeding through November’s election returns to decipher which Members are the most vulnerable Republicans, beginning with those who won marginal districts.

The State: SC's governor mum on plans, affair as tenure ends
Things are looking up for Gov. Mark Sanford as he prepares to leave office on his own terms more than a year after the international affair that derailed his once-promising political career. He will be replaced by his chosen successor. Tea party supporters across the country have taken up his messages about fiscal responsibility. Friends say his mid-life crisis is over. Still, the two-term governor says he's not sure what's next and talks vaguely about writing a book or going back into business.

New Jersey Statehouse Bureau: N.J. senator criticizes Gov. Christie, Lt. Gov. Guadagno for being out of state during blizzard
A Democratic lawmaker is questioning why both Gov. Chris Christie and Lt. Gov. Kim Guadagno are out of state at the same time, leaving Senate President Stephen Sweeney (D-Gloucester) as the state's acting governor during a blizzard that paralyzed the state. Christie in on vacation with his family at Disney World in Florida, while Guadagno is with her family in Mexico, Christie spokesman Michael Drewniak said. Sunday, hours after taking the oath to become acting governor, Sweeney declared a state of emergency.

CNN: Mikulski still breaking barriers 24 years into Senate career
When she is sworn in for a fifth term in January, Sen. Barbara Mikulski will become the longest serving woman in Senate history, breaking the 24-year record held by the late GOP Sen. Margaret Chase Smith of Maine. To mark her milestone, Mikulski invited CNN to her Senate office for an interview to reflect on her tenure - especially her efforts to empower other women.

For the latest national news: www.CNN.com

USA Today: Prosecutor misconduct lets convicted off easy
A USA TODAY investigation has documented 201 cases since 1997 in which federal courts found that prosecutors violated laws or ethics rules. Each was so serious that judges overturned convictions, threw out charges or rebuked the prosecutors. And although the violations tainted no more than a small fraction of the tens of thousands of cases filed in federal courts each year, legal specialists who reviewed the newspaper's work said misconduct is not always uncovered, so the true extent of the problem might never be known.

CNN: Northeast visitors, residents struggle to return to normal after storm
Residents of and visitors to the Northeast struggled to return to normal Monday night, with the worst of a brutal holiday-week blizzard having passed but with the headaches remaining for tens of thousands of stranded airline passengers and for millions of people still digging out.

For the latest international news: http://edition.cnn.com

Wall Street Journal: Iraq Wants the U.S. Out
Prime Minister Nouri al-Maliki ruled out the presence of any U.S. troops in Iraq after the end of 2011, saying his new government and the country's security forces were capable of confronting any remaining threats to Iraq's security, sovereignty and unity. Mr. Maliki spoke with The Wall Street Journal in a two-hour interview, his first since Iraq ended nine months of stalemate and seated a new government after an inconclusive election, allowing Mr. Maliki to begin a second term as premier.

Der Spiegel: Opposition to the Euro Grows in Germany
Surveys show that many Germans are worried about the future of the euro, but the country's political parties are not taking their fears seriously. The number of grassroots initiatives against the common currency is increasing, and political observers say a Tea Party-style anti-euro movement could do well.

CNN: Iran executes man as Israeli spy, hangs opposition group member
Iran has hanged a man convicted of spying for Israel and also executed another man who was a member of a government opposition group, state-run media reported Tuesday. The executions took place at Tehran's Evin Prison at dawn Tuesday.

CNN: Explosive found in parcel at Greek Embassy in Rome
Italian police on Monday found an explosive package at the Greek Embassy in Rome, the second time in as many weeks that embassies there have received explosives through the mail. The parcel did not explode, and authorities hope that it will provide information that will help in their investigation.

The African Union has asked Kenyan PM Raila Odinga to lead its efforts to resolve Ivory Coast's political crisis. The AU said Mr Odinga had been asked to "follow through the crisis", a month after the country's disputed polls.

The Guardian: David Miliband may be offered US ambassador post
Downing Street is considering offering David Miliband the post of British ambassador in Washington, the Guardian has learned. The former foreign secretary, still recovering from being beaten to the Labour leadership by his brother Ed, has the skills, contacts and abilities to make a success of the post, it is believed.

For the latest business news: www.CNNMoney.com

CNNMoney: Blizzard freezes crucial post-Christmas sales
The blizzard that walloped the U.S. East Coast over the holiday weekend struck retailers at a pivotal time, burying their crucial post-Christmas sales under a heavy blanket of snow. "Holiday 2010 just went from a truly Merry Christmas for retailers to a lost weekend with retailers scrambling to recover lost sales," Marshal Cohen, chief retail analyst with NPD Group, said in a note Monday.

New York Times: U.S. Entices Big Banks in Canada
The Bank of Nova Scotia is sometimes praised for having a nearly perfect record with its investments in the United States. But it is the only one of Canada’s five large banks that has largely avoided the American market. Stephen Harper, the prime minister of Canada, is among the many Canadians who regularly remind the world that their country’s banking system was left largely unscathed by the global recession and credit market collapse because of its regulation and prudent management.

Las Vegas Sun: Signs of a surge in Las Vegas conventions
After more than a year of lethargic convention attendance in Las Vegas, the meetings and trade show industry will regain much of its health in 2011. Southern Nevadans can thank rebounding corporate profits, a relentless convention sales force and that irksome volcano in Iceland for putting the local industry on the road to recovery.

CNN's Barbara Starr explains why the Haqqani network along the Afghanistan-Pakistan border is a threat to U.S. forces.

Reviewing the year in politics: In 2010, frustrated voters sent a message to Washington and gave the House back to the GOP.