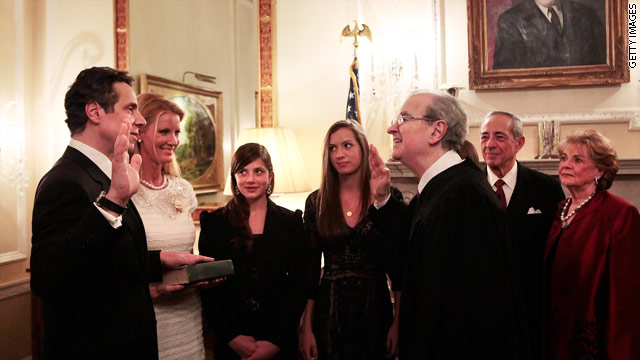 (CNN) - For New York, New Mexico and Michigan, the start of the new year means a new governor.

Click to watch video
Cuomo was sworn in Friday night before his formal inauguration Saturday. As a sign of the times, the public was not included in the swearing-in ceremony, and the inaugural event will host a fraction of the people that typically attend.

In a radio interview earlier in the week, Cuomo said the state's finances influenced the celebration.

"The challenges are daunting," Cuomo said. "So anyone who underestimates the slope of the hill that this state has to climb, let's call it a mountain, is just not dealing with reality."

Martinez assumed her place in history in a private ceremony at midnight, and, in a speech, acknowledged the state of the state.

"I assume the duties of governor understanding this is a challenging time," Martinez said. "Our state and its leaders must have the courage to make the kinds of changes that will positively impact people's lives and put us back on a course toward prosperity."

Snyder's inaugural address in Michigan focused on innovation, an essential element for a state with a 12.4 percent unemployment rate.

"This is our opportunity to realize we have a bright future," Snyder said. "It is time to deliver on high expectations."

Thirty-seven governors were elected in the 2010 elections, 24 of whom were elected to fill open positions. Saturday is the first day of swearing-ins that will continue for the next couple of weeks.

The transition will see prominent state leaders step down including Republican Govs. Arnold Schwarzenegger of California, Charlie Crist of Florida and Mark Sanford of South Carolina, as well as Democratic governors, some of whom were replaced Saturday, including Bill Richardson of New Mexico, David Paterson of New York, Ed Rendell of Pennsylvania and Jennifer Granholm of Michigan.