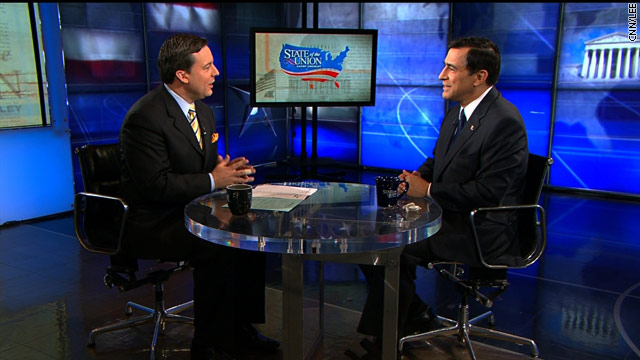 (CNN) - The incoming House Oversight and Government Reform chairman on Sunday tried to clarify his recent remarks to Rush Limbaugh where he called President Obama "one of the most corrupt presidents in modern times."

Rep. Darrell Issa said he meant to say the Obama administration instead of the president.

Click to watch video
"When you hand out $1 trillion in TARP (Troubled Asset Relief Program) just before this president came in, most of it unspent, $1 trillion nearly in stimulus, that this president asked for, plus this huge expansion in health care and government, it has a corrupting effect," Issa said on CNN's "State of the Union."

Although TARP – the program passed in 2008 intended to strengthen the financial sector by purchasing assets from financial institutions – was passed by Congress under the Bush administration, Issa said the unregulated funds were used by Obama like "presidential earmarks."

But the California Republican also admitted Congress shares some of the blame.

"All of that would not have been possible if Congress had done its job," Issa told CNN Chief White House Correspondent Ed Henry. "Instead what happened was we gave President Bush (the money and) President Obama inherited $800 billion worth of walking-around money with no guidelines."