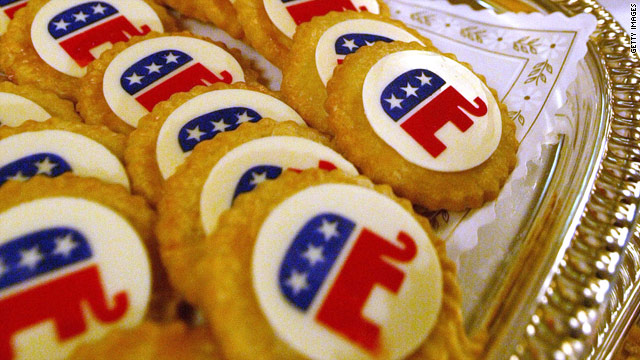 (CNN) - It's not grabbing the national spotlight like the fight for the chairmanship of the Republican National Committee, but this month's battle to lead the New Hampshire Republican party is just as fascinating.

The race is a showdown between a longtime party insider versus an organizer for the Tea Party movement in a state that plays an extremely important role in choosing the next GOP presidential nominee.

Monday the outgoing party chairman John H. Sununu officially endorsed Juliana Bergeron to succeed him when he steps down at the end of the month.

"I am absolutely convinced that Juliana Bergeron is the best person for the job of chairman of the New Hampshire GOP and I am going to write a letter to strongly recommend her to be elected by the state committee," Sununu told reporters.

Bergeron is the chairwoman of the Cheshire County Republicans and the owner of an insurance and investment firm in Keene, New Hampshire.

"Juliana has the combination of being a strong conservative, being committed to the party and the platform, being committed to a unified party, and being able to raise the money and manage the internals and those are the things that I made clear that I thought were critical aspects to this election cycle," added Sununu. "She's been involved in Republican politics for over 40 years. She's committed to the strong fiscal and social conservative planks of platform."

But the big question is whether Bergeron is conservative enough for the state party committee members who will vote on January 22 to elect a new chair. Some insurgents are backing former gubernatorial candidate and Tea Party organizer Jack Kimball, the other candidate in the race to succeed Sununu, a former Granite State governor and former White House chief of staff for President George H.W. Bush.

During Sununu's watch, Republicans made major gains in the November elections. The party held onto what was once considered a vulnerable open Senate seat, won back both of the state's congressional seats from Democratic control, stormed back to take control of the state Senate, going from minority status to a 19 to 5 majority, and won a 124 seats in the state House of Representatives, winning an historic majority in the chamber.

Bill O'Brien, the new House speaker who was backed by conservative outsiders, has endorsed Kimball in the race for the party chair.

Sununu says such endorsements don't bother him and adds that "Jack Kimball is a dear friend. I respect Jack."

But Sununu says that he's not so happy with what he terms negative campaigning from Kimball supporters: "I've just been a little bit disappointed about some of the divisive comments that have been made by some of Jack's supporters. That is not the way to bring the party together and I think it does Jack a disservice."

Sununu was happy to point out a number of times that Tea Party activists were part of the coalition that helped give the GOP massive victories in the state in the midterms.

And while Sununu says he's getting "too old for this," he did say he could continue to have a role in the party if Bergeron wins.

"I'm willing to do what ever I'm asked to do, as long as it doesn't impose too much of a time call on me."

And if Kimball wins: "If Jack gets elected I'll obviously talk to him and see what his agenda is."