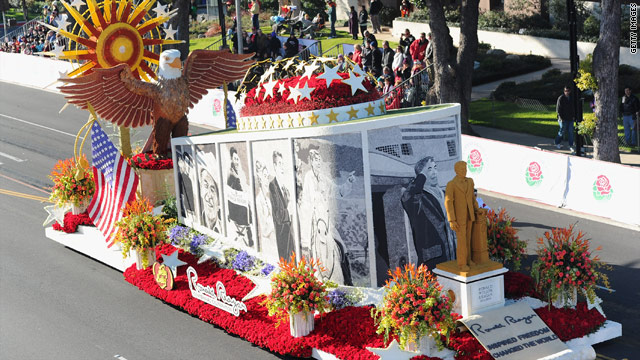 (CNN) - Former President Ronald Reagan's history-making float at the Rose Bowl Parade Saturday has been awarded a trophy for best depiction of life in the United States, past, present or future, the Tournament of Roses announced.

The float was designed to kick off a celebration events to commemorate the centennial of Reagan's birth. He would have been 100 years old on February 6, 2011.

The unique float was 55 feet long and 26 feet high. It featured 11 black and white photos of "iconic moments" in Reagan's life, a statue of the president modeled after his statue in the US Capitol Rotunda, a sculpture of a bald eagle, and 65,000 red roses.

The photos were made of poppy seeds and rice and were selected with the help of former first lady Nancy Reagan.