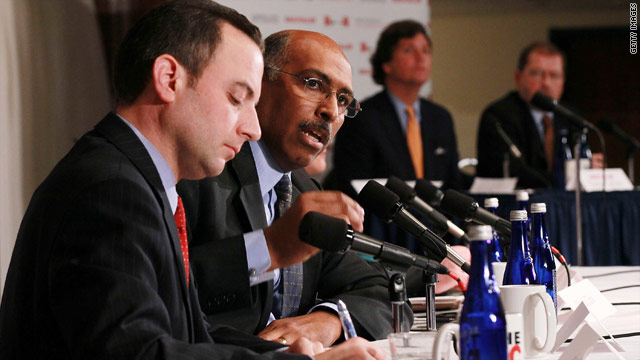 Washington (CNN) - Facing his rivals for the Republican National Committee chairmanship in public for the first time since announcing his re-election bid, Michael Steele on Monday defended himself in the face of criticism that he let the party's finances languish during a historic election cycle.

Steele was appearing at a debate between RNC candidates sponsored by Americans for Tax Reform, the Susan B. Anthony List and The Daily Caller.

Steele had provoked the anger of several state GOP chairmen during the final months of the 2010 election cycle by spreading RNC funds across the country instead of targeting battleground states with competitive congressional races.

Michigan Committeeman Saul Anuzis promised to be a chairman who will make "the trains run on time."

"The RNC needs to restore the trust and the confidence of our major donors, our grassroots activists," echoed Wisconsin GOP Chairman Reince Priebus, thought to be the frontrunner to replace Steele.

Then there was dark horse Maria Cino, a former executive director of the National Republican Congressional Committee pitching a record of competence. "I have successfully done this job before," she said. "I have turned around a national campaign committee that was in debt."

None of those remarks appeared to sit well with Steele as the debate progressed. He shook his head at several moments during the forum and at one point piped up to fend of criticisms that the committee's traditionally robust voter contact program went under-funded.

Steele said that while the RNC did not implement its traditional get-out-the-vote effort - the vaunted "72-hour program" - the committee leveraged 200,000 volunteers around the country to make 45 million voter contacts.

"Your state may have gotten X amount of dollars in the last cycle, but because we were playing in all 50 states, you didn't get that level," Steele said. "We found other ways to get resources, whether it was boots on the ground, technology, et cetera into your hands so that you can be competitive."

He added, "I think we won in all 50 states this year, and that's the goal: winning."

Calling the GOP "the party of Lincoln," Steele stressed that Republicans must continue efforts to reach out to non-traditional constituencies, namely Hispanics and African-Americans.

"This country is a lot bigger than we think it is sometimes," Steele said. "We cannot be a party that sits back with a litmus test and excludes. The national chairman cannot go into a state and say, 'You're less Republican than we are, I will not talk to you.'"

Steele seemed to downplay the importance of the debate while speaking to reporters after the event, which was streamed live over the internet. The audience at the National Press Club was largely composed of reporters and GOP operatives, but there were only a handful of voting RNC members in the room.

"This is a process that involves 168 people," Steele told reporters. "Ninety-nine percent of the people in this room will not vote on this matter. For me the opportunity is more precisely a personal relationship and conversation the individual members that all of us running for this job have to have."