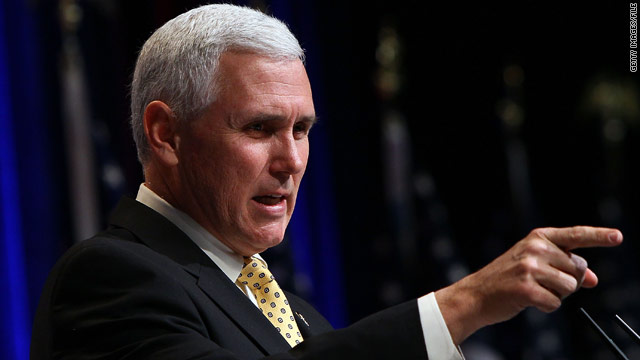 Is Pence's schedule a tip on political future?

Washington (CNN) - Call it reading the tea leaves, but until Republican Rep. Mike Pence of Indiana announces whether he'll make a bid for the 2012 GOP presidential nomination, or whether he'll run for governor in his home state, it's all we can do.

So here's the latest. Sources in Indiana confirm to CNN that Pence is scheduling to attend Lincoln Day dinners across his home state next month. The story was first reported Monday in Howey Politics Indiana.

But Pence will attend an event that's likely to draw possible Republican White House hopefuls: An Illinois Republican Party dinner in Chicago in honor of the late President Ronald Reagan, which is being held on Feb. 5, the day before the centennial anniversary of Reagan's birth. Pence may also speak later in February at the Conservative Political Action Conference in the nation's capitol, another cattle call for possible presidential candidates.

"There are a lot of Indiana Republicans that wish for the political equivalent of the one-handed economist but for now Pence continues to examine the different political options in both of his hands," Ed Feigenbaum, editor of Indiana Legislative Insight, a weekly Indiana political newsletter, told CNN.

Feigenbaum adds that it's unlikely Pence would announce any decision before next Wednesday because he would not want to steal the thunder from current Republican Gov. Mitch Daniels, who delivers his state of the state address next Tuesday night.

A spokesman for Pence says the congressman will have an announcement early this year regarding his political future.

Daniels is term limited, and Lt. Gov. Beckly Skillman announced late last month that she would not make a bid for the state's top job, increasing speculation that Pence would run for Indiana governor.

The Republican congressman from Indiana's 6th Congressional District easily won re-election in November, beating his Democratic challenger by a more than a two to one margin. The third ranking House Republican then announced that he would step down at the end of the year from his leadership role as Republican Conference Chairman, sparking more speculation that Pence might be gearing up for a White House bid or a run for Indiana governor.

As for Daniels, a favorite among many fiscal conservatives, he's the focus of speculation that he might launch a bid for the GOP nomination.

Daniels has stopped short of denying a bid for the White House and Monday told the Terre Haute Tribune Start that "there has now been so much of it, you can't ignore it,"

A spokesman from Pence's office later released a quote from the Representative, saying "I have always taken opportunities to speak at Republican events in Indiana and around the country and I will continue to do so."