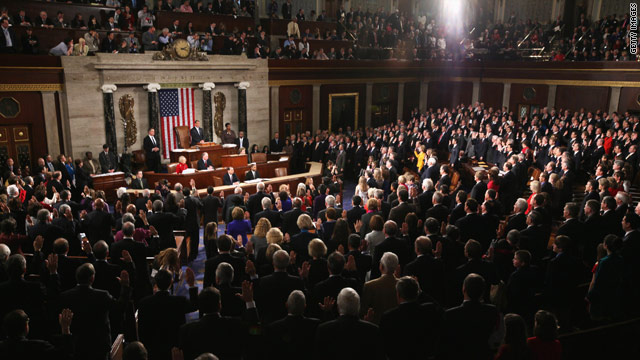 Senate Attic, Capitol Hill (CNN) – The GOP has taken over the U.S. House and the headlines. But there are other, significant stories of the 112th Congress.

Here are three you shouldn't miss: the largest class of new members in decades, the Democrat divide and a rare, serious push to change Senate filibuster rules.

1. The new guys have some weight

The 112th Congress has, believe it or not, 112 new members. That's if you include the three senators and two House members who won special elections and were sworn in last November.

The vast majority of those newbies, 96 of them, are in the House. That is nearly one out of every four. And it is the largest freshman class in 60 years.

These House members are not just newer, they are different. The 112th Congress has a lower percent of college degrees than the 111th but a higher percent of members have owned or have managed businesses.

To watch: will these new members be a large enough group to change the culture of the Capitol or will it change them?

On the same vote which made John Boehner speaker of the House, we got a look inside the Democratic party dynamic.

Nineteen Democrats, or 10 percent of the caucus, voted for someone other than Nancy Pelosi to be speaker. The greatest number of those votes went to Rep. Heath Shuler (D-NC), a Blue Dog who pledged to run against Pelosi if no one else would do it.

For Pelosi, who has met with internal opposition for much of her career, a loss of 10 percent may not be massive. But on a symbolic vote, it shows that moderate Democrats in the House still have no real home and may be swayed into backing Republicans, especially on fiscal policy.

3. The battle of Senator Byrd

The Senate filibuster is more than modern tradition (going back to the start of the 20th Century), it is one of the most powerful forces in American politics.

As the klieg lights burned onto the House side of the capitol, Democrats in the U.S. Senate were laying the groundwork for significant changes to the filibuster.

Those who know the background here, forgive us. The quick version: usually Senate rules, including the filibuster, can only be changed with a two-thirds vote. Except on the first day of a new Congress, when it only takes a majority vote.

Thus, Senate Democrats are making this first legislative day technically continue until the end of January, as they try to get support for filibuster changes.

What are Democrats considering? Not a repeal of the filibuster, but smaller changes.

a) Barring filibusters from nominations or from blocking the start of debate. It would allow the 60-vote threshold to end debate on bills.
b) Eliminate so-called "secret holds" from individual senators.
c) Require senators involved in a filibuster to stay on the floor and debate the issue the entire time.
d) Reach out to Republicans by simultaneously requiring that each side can propose a certain number of amendments for each bill.

Any of these changes could dramatically affect the flow of business and the tone in the Senate. No matter which party is in charge.

Postscript - Check out my post from last week on my resolutions for Congress and the press.