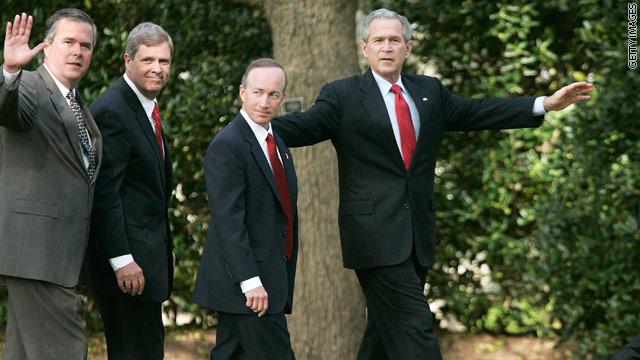 Washington (CNN) - Appearing on CNN Wednesday, Indiana Gov. Mitch Daniels was reluctant to blame himself or fellow Republicans for allowing the federal budget deficit to double during the eight years of the Bush administration.

Daniels, who served as Bush's budget director from 2001 to 2003, said instead that "the nation went into a deficit then because the bubble burst and we had a recession."

"It wouldn't have mattered what policies you tried to implement, that we were going to have a great big reversal," Daniels said in an interview with Wolf Blitzer on CNN's "The Situation Room." "You know, beyond that, I would just say that in every fight I ever had on the president's behalf with Congress - and there were a lot of them - there was never one where I was suggesting spend more and they were suggesting spend less. It was always the other way."

The governor, a possible contender for the Republican presidential nomination in 2012, was responding to a recent New York Times column suggesting that the tax cuts implemented by Bush and written into the budget by Daniels blew a hole in the federal budget, which was in the black when Bush assumed office.

Daniels said "there's plenty of blame to go around" for deficits created during the Bush administration, and said that some of his "biggest fights" were with Republicans in Congress.

"We could spend the next couple of years trying to apportion it and assign it between Republicans and Democrats and the economy, in which two bubbles popped and led to a plunge in revenues," he added.

The budget hole left by President Bush was "dramatic," Daniels said, but "we'd love to be back at that level today."

"I will just say that the choices that were made in those years were not all accurate, not all good ones. But far better than what we've been doing the last two years," he said. "And the numbers show it."

Daniels has said he will not make a decision about running for president until after the Indiana legislative session wraps in April. He remained coy about his intentions.

"I'm not saying that I won't under any circumstances, only that for the moment I'm not," he said when asked if he's running.

Daniels hinted that the late start to the presidential horserace gives him some breathing room to mull it over.

"All I can tell you, Wolf, is that when people first started bringing this idea to me over a year ago, at that time, they said it's already late, you've got to get going and that turned out not to be true," he said. "I think in an act of mercy, somehow we're going to have a shorter election this year. I think we all can be glad for that unless possibly political reporters."