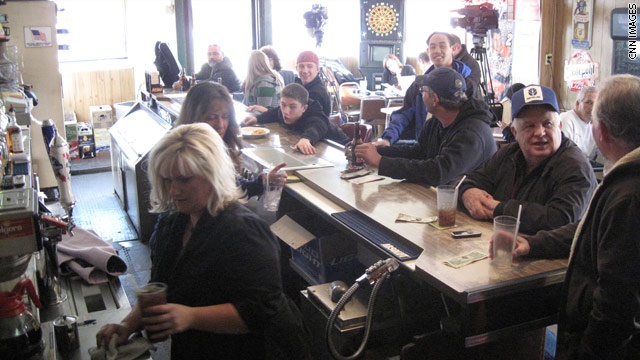 Bottoms up for Boehner's home town

Cincinnati, Ohio (CNN) - When Nancy Pelosi handed off the gavel to John Boehner Wednesday, friends of the Ohio Republican in the bar where he grew up raised a glass in his honor.

"We all did a shot of Crown (Royal)," said Vicky Bauer, the owner of Andy's Bar, which was founded by Boehner's grandfather. "We all did a toast."

Watch: CNN's Mark Preston visits Boehner's father's bar where the new House Speaker worked as a teenager, after the jump

Click to watch video
While Boehner's brothers and sisters traveled to the nation's capital to watch their brother become the next House speaker, a feisty group of regulars gathered at the bar to witness it themselves. Boehner grew up in Andy's, where he mopped the floors and tended bar. Now, he is one of the most powerful Republicans in the country and will play a key role in leading the GOP's efforts against President Obama's agenda.

At Andy's, which is named after Boehner's grandfather, a picture of his father, Earl, hangs behind the bar one of two lasting memories of the Boehner family, who no longer own the bar.

A benevolent moose head with a party hat gazes down on the patrons, who line up at the eight seat bar. Everyone seems to know each other and even though Boehner's family no longer owns the bar - his sister remains a bartender.

In this blue collar neighborhood in this Rust Belt state, public expressions of emotion are not always the norm. And Boehner is known to shed a tear, every once in a while.

"Come on John, dry it up and don't cry," shouted one of the patrons as Boehner took the handoff from Pelosi.

But Bauer, the owner of Andy's, looked up from the bar admiringly.

"He is so cute!" she said approvingly.

And for the owner of his old haunt, Boehner is good business too.