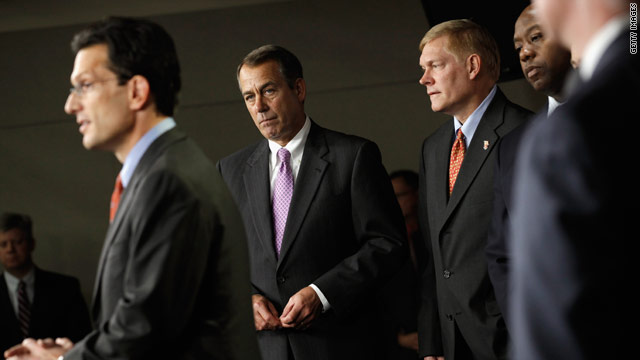 House Republicans dial back on promises

Washington (CNN) - Even before House Republicans took control of the chamber Wednesday, there were at least three areas where they appear to be backtracking on promises made: Cutting $100 billion in the first year, allowing opportunities for the minority party to offer amendments on bills, and making public attendance records for committee hearings.

The Republicans ran for office in 2010 on a platform they titled "The Pledge to America," which states they would reduce government spending to 2008 "pre-stimulus, pre-bailout levels" and cut "at least $100 billion in the first year alone."

House GOP aides are now backing off that $100 billion figure. They insist they will still cut spending back to 2008 levels, but it won't add up to $100 billion. They insist the reason is because they made the $100 billion calculation based on the budget that President Obama offered, and that budget was never enacted. Therefore, the government is currently running on lower, 2009 spending levels and that will make the dollar figure of the GOP cuts smaller.

Republican aides confirm the "back of the envelope" number they will now use is about HALF the original estimate - $50-60 billion in cuts.

"House Republicans remain committed to fulfilling their Pledge; this has not changed," said Conor Sweeney, spokesman for the House Budget Committee.

"House Republicans will continue to work to reduce spending for the final six months of this fiscal year – bringing non-security discretionary spending back to pre-stimulus, pre-bailout levels – yielding taxpayers significant savings and starting a new era of cost cutting in Washington," he said.

Being generous to those in the minority was always an objective of the new majority, as articulated by the incoming GOP Majority Whip Kevin McCarthy back before the election:

"Bills won't be written in the back of the room, where the bills have to be laid out for 72 hours, where bills actually have an open rule, where people can bring amendments up on the floor, which any freshman congressman that's sitting there today has never even seen that happen under the rule of Nancy Pelosi and the Democrats," McCarthy said on CNN "State of the Union" on October 10, 2010.

BUT – the health care repeal legislation, the first major bill that will move through Congress, will be a closed rule – meaning no one will be able to offer an amendment.

When asked about the this contradiction Tuesday night, Boehner said, "it's not like we haven't litigated this for years."

And, finally, the initial rules package that House Republicans will pass Wednesday had a provision to make committee attendance public. But the House GOP conference voted last night to strip that out (a move by Rep. Louie Gohmert, R-Texas). The goal had been transparency – who is at these hearings? But making that public will no longer be a requirement.

The reason? Some GOP lawmakers say they were concerned about getting slammed for missing hearings when they may have extenuating circumstances, like a death in the family.