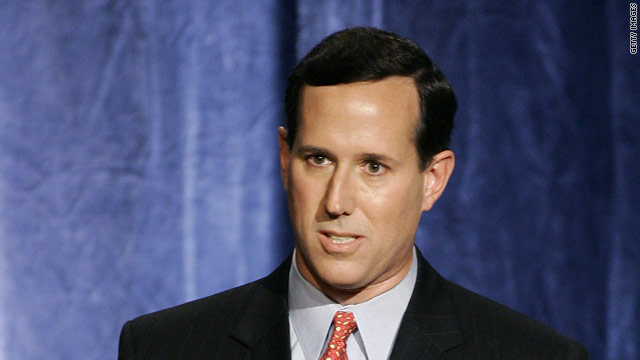 More signals Santorum is preparing for a White House run

More signals from Rick Santorum that he's gearing up for a run for the 2012 Republican presidential nomination.

A source close to the former senator from Pennsylvania confirms to CNN that later Wednesday Santorum will announced that he's bringing on board one of the top GOP political strategists in New Hampshire, a state that plays a crucial role in the race for the White House. Santorum will also next week make another visit to the state, which traditionally holds in nation's first primary in the presidential calendar.

The operative is Mike Biundo, who most recently steered Republican Frank Guinta's successful campaign for mayor of Manchester, the state's largest city, and this past autumn's winning campaign for Congress. Word of Biundo's hiring and the trip to the Granite State was first reported earlier Wednesday by John Distaso, senior political reporter for the New Hampshire Union Leader.

The source confirms to CNN that Biundo will serve as the state director for "America's Foundation," Santorum's political action committee. The former senator is expected to say that he's "thrilled to have Mike a part of our team. His experience and knowledge will be invaluable in New Hampshire."

Santorum's expected to appear at an event next Tuesday for conservative activist and 2010 GOP senate candidate Ovide Lamontagne's new political action committee, followed by two stops later that day and the following day.

The former two-term senator lost his 2006 re-election bid by 18 points to Democrat Bob Casey Jr. and was largely out of public view for a couple of years, except for appearances on Fox News. But Santorum made numerous visits across the campaign trail in the months leading up to November's elections, lending a helping hand to fellow Republicans running for office.

If Santorum formally jumps into the race, he could face a potentially crowded field of candidates, including a string of better funded opponents with larger national political operations.

Recent polls indicate that Santorum registers in the low single digits among Republican voters when it comes to the choice for their party's next presidential nominee. Still, due in part to his strong opposition to abortion rights, Santorum remains popular with many socially conservative voters who have long had an influential role in the GOP primary process.