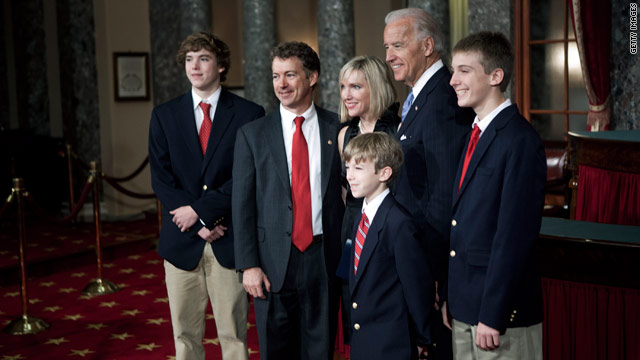 (CNN)-The 112th Congress is a family affair for GOP Congressman Ron Paul and his son, Republican Senator Rand Paul. But that doesn't mean they always agree.

Speaking with CNN's Chief National Correspondent John King, the two Pauls diverge on whether the House Republican pledge to cut $100 billion dollars from the federal budget in the first year is realistic.

Click to watch video
In an interview for CNN's "John King, USA," Congressman Paul commented on an apparent backtrack from the original GOP promise. The elder took a conservative tack, explaining that instead of a failure, Republicans are now "facing up to reality."

"I mean they don't have the votes, they don't have the support, I predict the budget this year will be bigger than last year. I don't think the budgets are gonna shrink because just the cost of living increase and other things, there's so much momentum, I don't have high expectations that we're gonna be cutting much of anything."

Senator Paul, the freshman, had a more hopeful point-of-view: "I'm a little more optimistic than that actually and I think actually we're introducing a bill that will be $500 billion dollars in cuts…We will push the leadership…the tea party does want spending cuts, we do want to reduce the deficit, and I'm more optimistic. I think we will get some concessions.

And when asked how Americans should respond if Republicans cannot keep their promises, the father-son team traded places on perspective.

Rand Paul responded "[Americans] should kick them all out and send us all home."

Ron Paul countered "Well I think they should kick the people out who voted incorrectly. If we've been voting the right way, why would you get kicked out for that?

Hopefully they can settle any disagreements before the sun goes down; Sen.-and-Congressman Paul will be sharing a residence in DC during the congressional term.