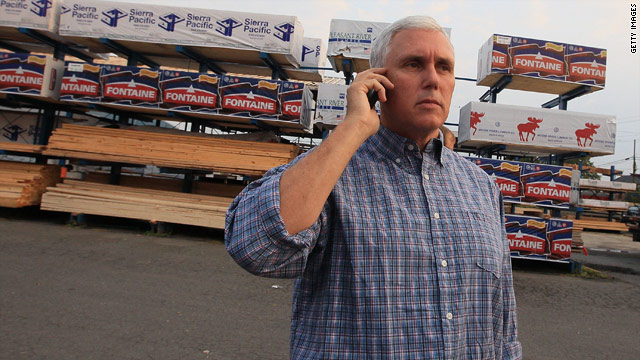 This, as speculation grows over whether the Republican from Indiana will make a bid for the 2012 GOP presidential nomination, or whether he'll run for governor in his home state.

Pence spokesman Matt Lloyd confirms to CNN that the congressman, who's entering his sixth term in the House, will keynote the Awakening Conference's dinner at a resort on Kiawah Island in South Carolina on Saturday. The conference is an invite-only gathering of top conservatives that was originally conceived up to serve as a conservative alternative to the more progressive Reinaissance Weekend. Pence's attendance at the conference was first reported by Politico.

South Carolina will play an influential role in choosing the next Republican presidential nominee, thanks to its holding of the first southern primary in the race for the White House. Word of Pence's visit to the Palmetto State comes one day after news that Pence is scheduling to attend Lincoln Day dinners across his home state next month. The story was first reported Monday in Howey Politics Indiana and later confirmed by CNN.

Besides the South Carolina visit, Pence will attend an event that's likely to draw other possible Republican White House hopefuls: An Illinois Republican Party dinner in Chicago in honor of the late President Ronald Reagan, which is being held on February 5, the day before the centennial anniversary of Reagan's birth. Pence may also speak later in February at the Conservative Political Action Conference in the nation's capitol, another cattle call for possible presidential candidates.

Lloyd later released a statement from the representative, saying, "I have always taken opportunities to speak at Republican events in Indiana and around the country and I will continue to do so."

The Republican congressman from Indiana's 6th Congressional District easily won re-election in November, beating his Democratic challenger by more than a two- to-one margin. The third ranking House Republican then announced that he would step down at the end of the year from his leadership role as Republican Conference Chairman, sparking more speculation that Pence might be gearing up for a White House bid or a run for Indiana governor.

The current governor, Republican Mitch Daniels, is term limited, and also the subject of speculation over a possible White House bid. Indiana Lt. Gov. Beckly Skillman, also a Republican, announced late last month that she would not make a bid for the state's top job, increasing speculation that Pence would run for Indiana governor.

Lloyd says the congressman will have an announcement early this year regarding his political future.