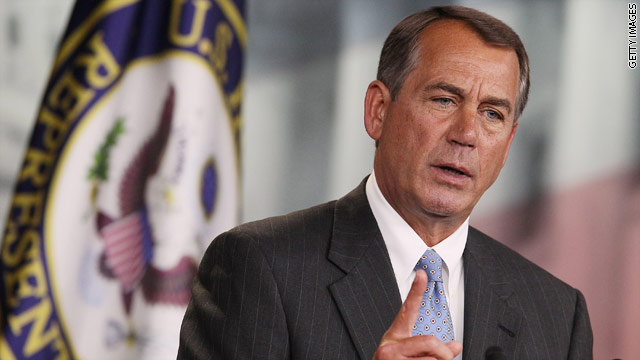 "I promised a more open process. I didn't promise that every single bill was going to be an open bill," said Boehner during his first news conference as the new House Speaker.

"There will be many open rules in this Congress, just watch," he said.

Boehner was responding to a question from CNN about the fact that House Republicans plan to bring a health care repeal to the House floor without committee hearings, and without giving Democrats an opportunity to offer amendments. Republicans have repeatedly promised that legislation would not be written behind closed doors without committee hearings, and that Democrats would be allowed to offer changes to bills on the House floor.

House Republicans have also angered some tea party activists by saying the $100 billion in spending they promised to cut in the first year is likely out of reach, blaming it on the fiscal calendar among other things.

I will say this: We will meet our commitment to the pledge in this calendar year. There's no ifs, ands or buts about it."

Just before Boehner's news conference, the Congressional Budget Office released a report saying the GOP bill to repeal the health care law would add $230 billion to the federal debt by 2021.

Democrats pounced, calling that proof that not only are Republicans wrong to repeal the health care law, that they're going back on yet another promise not to add to the deficit.

Boehner tried to brush off the CBO report.

"I do not believe that repealing the job-killing health care law will increase the deficit. CBO is entitled to their opinion," he said.

"Listen, even the actuaries at the Centers for Medicare and Medicaid have made clear that this bill will not save the kind of money that was predicted earlier," said Boehner.

House Democrats also criticized Republicans for exempting the health care repeal bill from the new GOP rule that requires any legislation that adds to the deficit to be paid for with spending cuts. Pressed on why they didn't follow this rule for health care, the Speaker again dismissed the CBO's assessment.

"I don't think anybody in this town believes that repealing Obamacare is going to increase the deficit." Boehner said.

Boehner's office insists House Democrats "rigged the CBO score" last year when they provided the budget office with a set of what Republicans say were inaccurate assumptions about the economic impact of the health care law.

Over and over, Boehner defended the GOP push to repeal health care, despite the reality that Republicans don't have the votes to pass it the Senate.

One issue the Speaker has been careful not to take sides on is the politically thorny issue of whether to raise the debt limit, as President Obama has now formally asked Congress to do.

Treasury Secretary Timothy Geithner says if the government doesn't raise the $14.3 trillion borrowing limit by spring, the U.S. will default.

Boehner said only that he first wants to make sure federal spending is being cut.

"If the House is going to move an increase in the debt limit, I think we have a responsibility to cut spending and to make changes in the process by which we spend the American people's money," said Boehner.

"I think it would be irresponsible to try to deal with a debt limit without taking corrective action so that we're not facing this each and every year," he said.