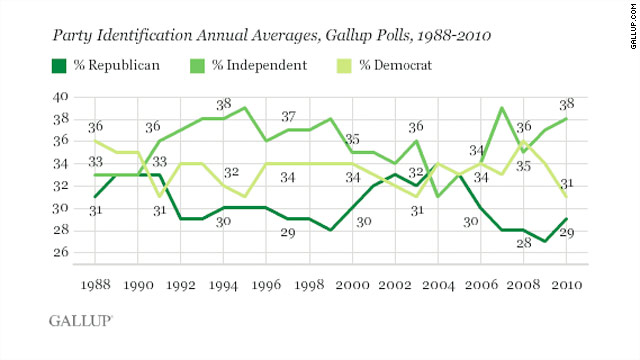 (CNN) – The number of Americans identifying themselves as Democrats is at its lowest point in seven years, according to a new survey by Gallup - a warning sign for the president and his party as the next race for the White House gets set to begin.

According to the annual Gallup survey of party identification, 31 percent of Americans say they are Democrats – a number that is down five percentage points from 2008 and is the same as it was in 2003 – the year following impressive Republican gains in the House and Senate.

But Democrats can take some solace in the fact that an even smaller percentage of Americans (29 percent) identify themselves as Republicans, despite the GOP's hugely successful midterm elections that resulted in a change of control in the House of Representatives. That percentage is up 2 points from last year but still significantly below the 34 percent that said they affiliated with the GOP in 2004.

Meanwhile, those Americans who say they identify with neither party has shot up to 38 percent, up 3 points since 2008 and among the highest it has been in the 22 years Gallup has conducted the survey.

In a separate 2010 Gallup poll seeking to pin down the leanings of independent voters, 45 percent of Americans said they were Democrats or independents who leaned Democrat while 44 percent said the same about Republicans. The 1-point advantage for President Obama's party is the smallest in seven years.

The survey results are based on aggregated numbers from 21 different Gallup and USA Today/Gallup polls conducted in 2010. In all, the results include information gathered from more than 25,000 interviews with U.S. adults by telephone.