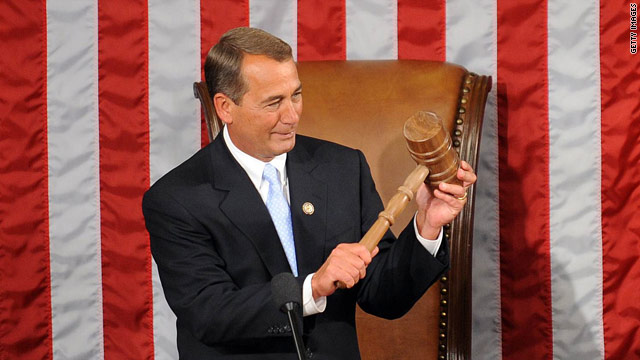 "As you get down to work, there are a few things to remember. You did not become Speaker because America suddenly fell in love with you or the Republican Party. You became Speaker because America, led by the Tea Party, repudiated Barack Obama, Nancy Pelosi and the party of socialism," writes Judson Phillips, founder of Tea Party Nation, a national Tea Party organization that's based in Tennessee.

As to what Tea Party activists want the new Congress to do, Phillips writes: "First, STOP SPENDING MONEY!"

Phillips ends his letter by predicting that Boehner has two choices: "You can simply be a nice guy and compromise on legislation and the agenda. And you might not be speaker in two years. Or you can stand firm for a strong conservative agenda. If you fight, it will be a bloody fight, but when you look at the great leaders of the past, they did not compromise. They fought. What will it be? Do you have the Reagan in you?"

Phillips founded Tea Party Nation in 2009. It runs a social networking site with what it says are around 40,000 members. The group is best know for holding the first National Tea Party convention, in Nashville, Tennessee in February 2010. The convention came under criticism by others in the movement because of Tea Party Nation's for profit status at the time.

Phillips' comments come one day after Mark Meckler, one of the leaders of the Tea Party Patriots, termed as an "absolute joke" word that House Republicans would not be able to cut $100 billion from this year's federal budget.

The Republicans, thanks in part to strong support from Tea Party activists, won a net gain of 63 seats in the House in November's midterm elections, taking back control of the chamber.