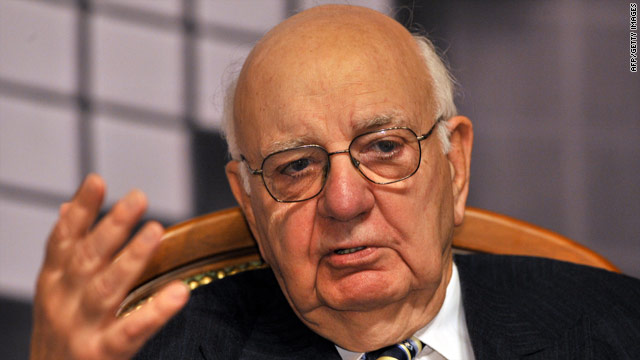 (CNN) - Former Federal Reserve Chairman Paul Volcker is stepping down as chairman of President Obama's outside economic advisory panel, according to Democratic sources familiar with the move, as the reshuffling of the White House's economic team continues.

The announcement comes as senior officials say Obama is expected on Friday to make a much more substantial move by officially naming Gene Sperling to replace Larry Summers as the chairman of the National Economic Council, the key policymaking office inside the White House.

Sperling currently serves as a counselor to Treasury Secretary Timothy Geithner and won high marks inside the administration for his negotiating skills with Congressional Republicans that helped seal the tax deal during the lame duck session of Congress in late December.

Sperling previously served in the NEC job during the Clinton administration and top Democrats close to the White House say his expected hiring shows the President is leaning more and more on Clinton veterans to gear up for working with a closely divided Congress. Obama also huddled Wednesday at the White House with former Clinton Commerce Secretary Bill Daley, who is a leading contender to become White House chief of staff.

The maneuvering could also signal a less aggressive White House posture toward Wall Street, since Daley has most recently served as a top official for JP Morgan Chase in its Midwest offices.

In addition, Volcker had been a strong advocate for much tougher regulations for Wall Street in the wake of the financial crisis, although his position as chairman of the president's Economic Recovery Advisory Board (PERAB) gave him little clout to actually enact policy.
While the president has publicly expressed his admiration for Volcker's counsel, the former Fed chairman clashed with other administration officials who were not so eager to pick more fights with Wall Street.

But his departure is not unexpected since the chairman of PERAB only serves a two-year term and Volcker was coming up to the expiration of his term. A successor to Volcker is not expected to be named when Obama announces other economic staff moves Friday.