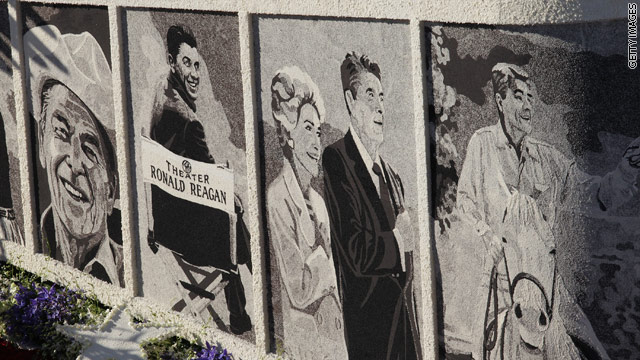 Washington (CNN) - When Ronald Reagan left office, a group of Washington-area students were still years from being born. But they stood listening to a tour guide Friday at the National Archives, among the first to see a new exhibit on the former president that opened just hours earlier.

Rarely shown in public, the exhibition includes documents and mementos from Reagan's presidency as part of the centennial celebration of the 40th president's birth.

The display, a joint effort of the National Archives and the Reagan Centennial Commission, is now part of the "Public Vaults" display, with new items rotating in every three months.

The exhibit includes three pages of President Reagan's "Evil Empire" speech, complete with his edits. Words and lines are crossed out and new lines hand-written by the former President are across the top.

It also includes note cards Reagan used as talking points for a crucial 1985 meeting with Soviet Foreign Minister Edward Shevardnadze, fragments of the first U.S. missile destroyed after the signing of the INF treaty, letters between former Soviet leader Mikhail Gorbachev, and a bronze model of the Kremlin Gorbachev gave to him as a gift.

The exhibit will continue through the year. Next month, events are planned at the Reagan Library in California on February 6th, the day the former President was born 100 years ago in Illinois.