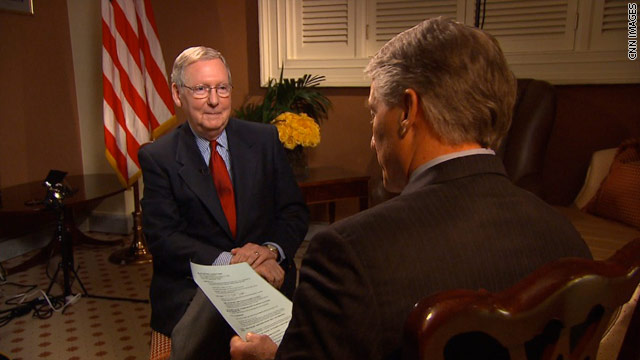 "Finally they found a guy who has some real world business experience," McConnell said on CNN's "John King, USA." "So maybe the president is going to take a more centrist direction and if he does we may be able to do some business."

Click to watch video
Invoking his oft-used analogy, the Kentucky Republican said the administration now has people who have run a lemonade stand, a reference to the business backgrounds of the new staff members.

"I'm not the president of the United States, nor do I strive to be, and I think if you're the president of the Untied States you ought to have around you people who have some real business experience, and certainly they didn't have that in the first couple of years," McConnell told CNN Chief National Correspondent John King.

Obama tapped former Commerce Secretary William Daley – who serves on the operating and executive committees of JP Morgan Chase – as his new chief of staff and Gene Sperling – a counselor to Treasury Secretary Tim Geithner and former economic advisor to President Bill Clinton – as National Economic Council director, a position he also held under Clinton.

McConnell said he thinks there is a six to nine month window where members of both political parties will be able to work together, using the bipartisanship of the recent lame duck session as a model. He noted that he and Obama have lately had more conversations than they did in his first two years in office.

But he said health care is not an issue where he anticipates compromise and that voting to repeal the policies will allow members to make their stance clear and "then we'll go forward."

To address the rising debt, McConnell said to start, Republicans want to cap annual discretionary spending to 2008 levels and address the "long-term underfunded liability problems of entitlements," but when pressed, he did not outline further cuts he would support.