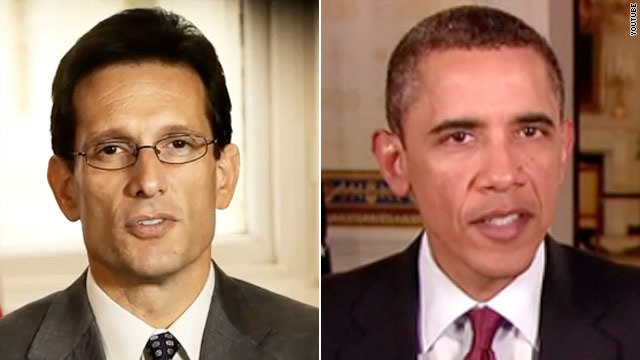 (CNN) - Democrats and Republicans often spout plans to address the budget and long-term deficit, but in their weekly web and radio speeches charted different courses to achieve the goals.

New House Majority Leader Rep. Eric Cantor targeted health care as the first order of business for the new Congress, saying in Saturday's address that repealing the legislation would not only tackle care, but also decrease government spending and help businesses.

Click to watch video
Click to watch video
"At a time when we need to do everything in our power to encourage job creation, the health care law hangs around the necks of businesses small and large, causing them to not hire new workers - or worse, be forced to let current employees go," Cantor said. "The law is fundamentally flawed because it enables federal bureaucrats to come between patients and their doctors, limiting choices."

President Obama, meanwhile, highlighted in his Saturday address the recent drop in the unemployment figures and an economy that added more than 100,000 jobs in the last month as a sign the economy continues to rebound.

He urged small businesses to take advantage of tax incentives that were part of the economic package signed into law last month. While encouraged by the new figures, he also said "we plainly still have a lot of work to do."

"Our fundamental mission must be to accelerate hiring and growth," Obama said. "That should be the focus, day in and day out, of our work in Washington in the coming months, as we wrestle with a challenging budget and long-term deficits."

While Congress braces for a fight over an increase to the debt ceiling and the rising national deficit, Obama also asked that Washington refrain from the symbolic battles that often consume politics.

"The tax cuts and other progress we made in December were a much-needed departure from that pattern. Let's build on that admirable example and do our part, here in Washington, so the doers, builders and innovators in America can do their best in 2011 and beyond," Obama said.