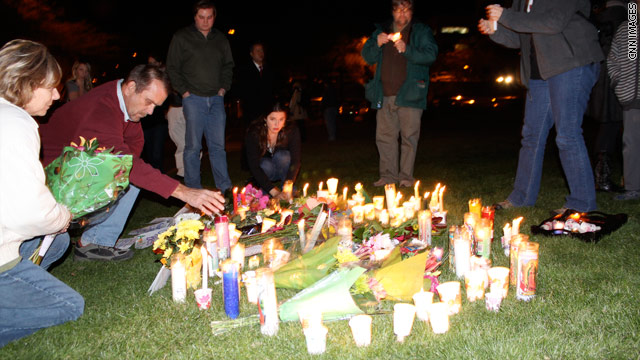 Washington (CNN) - Sarah Palin's political aide removed a controversial web post Saturday after a gunman attempted to assassinate an Arizona congresswoman in a mass killing that left, among others, a 9-year-old girl dead.

But a Palin aide Saturday denied the web posting from the 2010 congressional campaign - featuring gun sights over the congressional districts of 20 Democratic candidates – was designed to incite violence. Rebecca Mansour told conservative host Tammy Bruce that it was a political tool and noted it should have been removed after the November election.

And Mansour chastised critics who tried to link Palin to the shooting Saturday in Tucson, Arizona, that left Democratic U.S. Rep. Gabrielle Giffords in critical condition.

"We are all looking at our Twitter feeds and I am seeing people and it's really sad," Mansour said in the interview that is posted on Bruce's web site. "People actually accuse Gov. Palin of this. It's appalling. Appalling. I cannot even express how disgusting that is."

Shortly after Giffords was shot Saturday, the issue of heated political rhetoric became a hot topic on the blogs and on the cable news channels. Palin's "Take Back the 20" web posting became an example for some people who said it has gone too far. And when a Palin political aide had it removed from the website, critics suggested the former Alaska governor was trying to distance herself from the shooting.

"We had thought that 'Take back the 20' was taken down after the November election because it's irrelevant now," Mansour said. "And they called us this morning and said, 'Do you want us to take this thing down?' Because they realized instantly, you know."

"And I think, you know, just reflectively without even thinking about any consequences, our PAC treasurer said, 'Well it should have been down already. Why is it still up? We are not paying for that. It is not getting any traffic. It is no longer relevant.' So it was taken down."

"It was not trying to scrub anything. The original Facebook post where we had this graphic is still up. And I just want to clarify again, maybe it wasn't done on the record enough by us when this graphic came out, the graphic is, we never, ever, ever intended it to be gun sights. It was simply crosshairs."

Palin's "Take Back the 20" was an effort to defeat Democrats who voted for healthcare reform and represented congressional districts that Sen. John McCain and Palin, then Alaska governor, carried in the 2008 presidential election.

The 2008 Republican vice-presidential nominee issued a statement Saturday expressing remorse for the victims.

"My sincere condolences are offered to the family of Rep. Gabrielle Giffords and the other victims of today's tragic shooting in Arizona," Palin wrote in a note placed on her PAC's web site and Facebook page. "On behalf of Todd and my family, we all pray for the victims and their families, and for peace and justice."

Mansour, in her interview with Bruce, said she didn't "understand how anybody can be held responsible for somebody who is completely mentally unstable like this.

"Where I come from the person that is actually shooting is the one that's culpable," she said. "We had nothing whatsoever to do with this."

She also noted that early reporting indicated the suspect, 22-year-old Jared Lee Loughner, was believed to hold "liberal views." Mansour added, "But that is not to say I am blaming the left either. He is clearly mentally unstable."

Mansour also said the controversial web posting had been designed by a political consultant.

"We saw it really quickly and we said, 'Yeah, that's fine, that's great,'" Mansour said. "We had never even imagined or occurred to us that anybody would interpret it as violence, because it's not. And you know what, targeting congressional swing districts, targeting swing races, just is part of our Democratic process. Everybody does this. And it is the way the process is supposed to work. What is not supposed to happen in our democratic system is for lone, crazy gunmen to commit mass murder like this, like we saw today."

CNN has left a message with Mansour seeking further comment.