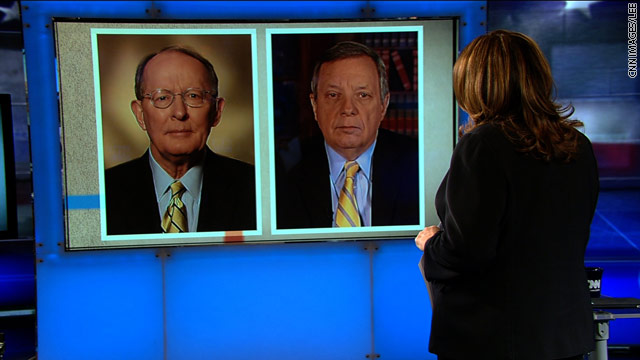 On Sunday, Illinois Democratic Sen. Dick Durbin said violent words and images have become too "pervasive in our discussion of political issues."

Click to watch video
He specifically referenced the map Sarah Palin released in the lead-up to the Congressional vote on health care that showed crosshairs over contested Democratic districts, but he was careful not to make a direct connection between Palin's words and Saturday's events.

"Don't we have an obligation, those of us in public life and those who cover us to say, 'This is beyond the bounds. It may be constitutionally permissible, but it shouldn't be acceptable rhetoric?" Durbin said on CNN's "State of the Union." "We owe it to our own in both political parties to have at least the good sense and common decency when people say these outrageous things to say, 'Wait a minute, that just goes too far, whether it comes from the right or from the left."

Tennessee Republican Sen. Lamar Alexander said it's time to "cool it, tone it down, treat each other with great respect," even on issues that often divide politicians, like immigration, taxes and health care. He urged those in public life to "do our best not to inflame passions."

But Alexander said he is not worried about his safety and will continue with his normal schedule.

"I'm going to be at the basketball game on the front row, I'll be at the grocery store in a few minutes," Alexander told CNN Chief Political Correspondent Candy Crowley on Sunday. "We'll be out just like elected officials are supposed to be."

In fact, Alexander said, the first order of business for the new Congress should be addressing the debt, but both he and Durbin said it appears unlikely that a repeal of health care legislation would pass in the Senate.

"I don't believe repeal has any legs in the Senate at this time," Durbin said.

Alexander, who serves as the chairman of the Senate Republican Conference, agreed, saying Democrats have the numbers to prevent a repeal, but that "almost all, if not all" Republicans will vote to repeal the health care law.

However, both senators also appeared open to amending the law. When asked what he would want changed, Durbin pointed to a revision in business tax reporting and Alexander said he favored limiting the expansion of Medicaid in the states.