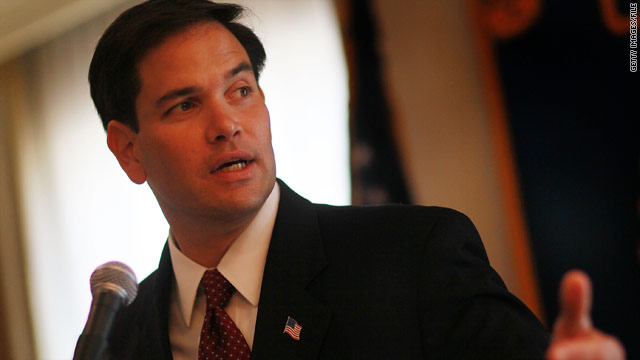 Washington (CNN) - There are many reasons to place Sen. Marco Rubio, R-Florida, at the top of any 2012 vice presidential shortlist. He's young, telegenic, a talented fundraiser, and appealing to the conservative base. And perhaps most importantly, he's a Hispanic hailing from the nation's largest battleground state.

But Rubio, who has yet to take a vote as a U.S. Senator, was eager to shoot down the speculation in a radio interview Monday.

"Are you at least open to the possibility?" asked Panama City radio host Burnie Thompson.

"No, I'm not," Rubio answered. "And I'll tell you why I'm not. This job is a big job. To be the senator from Florida is a big job. In addition to the votes you take in Washington of national importance, our state has a multitude of issues. I mean, it will soon be the third largest state in the country and perhaps the most complex state in the country in terms of the set of issues it faces. In order to do that job, and do it well, you've got have to have 100 percent focus on it. I ran for the U.S. Senate because I wanted to be a U.S. Senator."

Rubio called the chatter "flattering" but said it's just the product of the Washington media "circus."

"In a couple weeks, they'll talk about someone else," he said. "They'll move on."