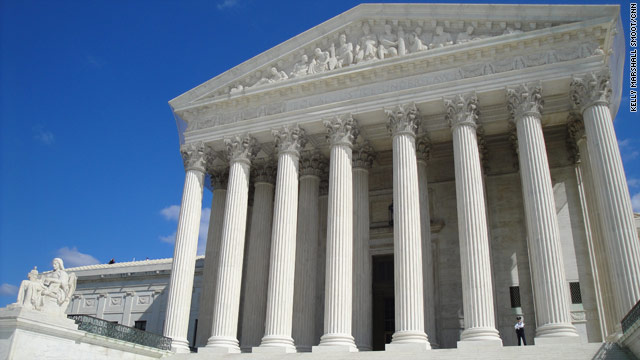 Washington (CNN) - The Supreme Court interrupted its public session Monday to mark the nationwide moment of silence in memory of the victims of Saturday's mass shooting in Arizona that left a federal judge dead and a congresswoman seriously wounded.

Chief Justice John Roberts and his eight colleagues paused on the bench after hearing their first oral argument. Roberts had opened the session by saying, "That senseless shooting on Saturday caused devastating injury to persons who all, in their own way, contribute to the strength of our nation... I speak for the members of this court in extending our condolences to all the victims and their families."

The courtroom was silent as lawyers and members of the public joined the court in the brief moment of reflection. Several justices deeply bowed their head, including Roberts, and Justices Antonin Scalia, Ruth Bader Ginsburg and Sonia Sotomayor. Justices Samuel Alito and Stephen Breyer were among those who looked straight ahead thoughtfully.

The court had arranged to begin its public session five minutes early so that it would finish in time to mark the moment of silence. After the roughly 45 second pause, the public session resumed with the second one-hour argument.

Court officials acknowledged this change in the normally rigid public schedule was very unusual, and had no recollection of any recent related gesture.

Roberts Sunday released a statement on the Tucson tragedy, in his role as head of the entire federal judiciary.

"Chief Judge John Roll was a wise jurist who selflessly served Arizona and the nation with great distinction, as attorney and judge, for more than 35 years," said Roberts. "(His) death is a somber reminder of the importance of the rule of law and the sacrifices of those who work to secure it."

Roll had been chief judge of U.S. District Court for the District of Arizona since 2006. That meant he took on designated administrative roles in addition to his regular trial court duties. He had traveled twice a year to Washington to meet with fellow judges for the Judicial Conference, a meeting of top federal court officials. The closed-door sessions at the Supreme Court chaired by Roberts dealt with such policy issues as salaries, security, and rules of conduct.