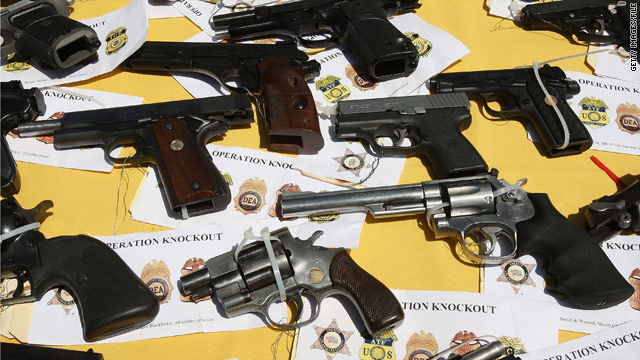 Washington (CNN) - Accused gunman Jared Lee Loughner opened fire with a gun using a magazine holding up to 30 bullets before he was tackled while trying to reload.

Some Democrats in Congress argue such high capacity magazines should not be legal, and are renewing their push for a ban.

"That enabled him to do the kind of damage that he did. There is no earthly reason for these weapons to have that kind of bullet capacity," said Sen. Frank Lautenberg, D-New Jersey.

In 1994, President Clinton signed an assault weapons ban that made high capacity ammunition magazines like the one Loughner allegedly used illegal. But the ban lapsed in 2004 without much of a fight.

Senior Democrats who had been front and center pushing gun control in the 1980s and 90s concluded it was bad politics.

After Gore lost his home state of Tennessee and West Virginia, Democratic strategists argued they were forfeiting critical votes in rural America by advocating stricter gun laws; many Democrats are still wary of the issue.

"Gun control is probably not a winning issue," said Patrick Leahy of Vermont, who is known as a liberal, but supports gun rights.

That's why even in the Senate, where Democrats still have control, senior Democratic sources say gun control legislation is not likely to go anywhere.

"We're going to focus on fights we can win," said one senior Democratic source.
The reality is that well before Republicans took control of the House, pro-gun forces had gained ground.

A Democratic Congress passed measures that allowed firearms in national parks, and in luggage on Amtrak.

Last year, House Democratic leaders pulled legislation giving the District of Columbia voting rights, because gun rights advocates had the votes to add a provision that would have overturned some D.C. gun restrictions.

"We are a pro-gun Congress, and have been for a while," says a House Democratic leadership aide.

Still, in the wake of the 2007 Virginia Tech shooting spree, Congress did act to strengthen states' reporting requirements on gun background checks.

Gun control advocates are trying to seize the moment again, and are pushing Democratic leaders to, in their words, show leadership on the issue.

Paul Helmke of the Brady Campaign is already walking the halls of Congress lobbying the Senate to take up Lautenberg's legislation banning high capacity magazines, and a companion bill from Rep. Carolyn McCarthy, D-New York, is in the House.

Lawmakers like Rep. Mike Rogers, R-Michigan, insist high capacity magazines are "already out there," and passing a ban would be pointless.

"Bad guys are going to get guns, they're going to get clips and they're going to do bad things because that's what their intention is. We should not divert our attention from what the real problem was here. We had an individual who has expressed violent intent who clearly had some mental instability along the way," said Rogers.

"Getting into a debate – should it be three rounds or eight rounds or 30 rounds is irrelevant. The fact that they’re going to have access to firearms and we still have the second amendment in the United States," said Rogers.

When asked what the chances are for any gun legislation to pass Congress, a senior Republican leadership aide replied, "zero."

The National Rifle Association declined to comment on any gun legislation, calling it "inappropriate" right now.

The NRA’s statement simply said, "Our thoughts and prayers are with the victims of this senseless tragedy, including Representative Gabrielle Giffords, and their families during this difficult time. We join the rest of the country in praying for the quick recovery of those injured."