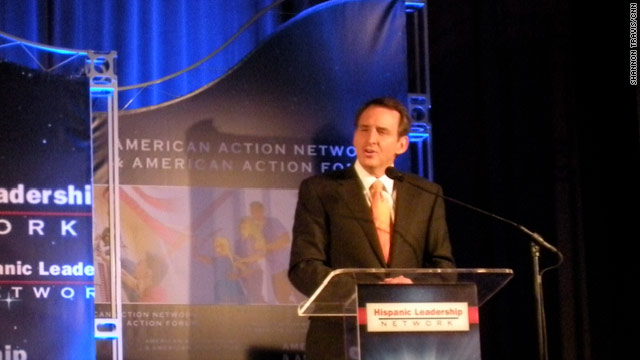 Coral Gables, Florida (CNN) – For one potential presidential candidate, it's a tempting choice: should he try to become the most powerful leader of the free world? Or should he just open a bar, instead?

That's what Republican Tim Pawlenty has repeatedly said now about his considerations of a presidential bid – albeit the former Minnesota governor says it jokingly. Call it a talking point - with salt.

CNN spoke to Pawlenty before he addressed a gathering of national Republicans attending a conference to court Hispanic voters. The two-day Hispanic Leadership Network Conference is being held in Coral Gables, Florida.

Asked how close he is to making a decision, Pawlenty continues his refrain.

"Well, it's a tough choice. Because if I don't run for president – then I'm going to open a margarita bar down here in South Florida and play some Kenny Chesney music, get a flowered shirt," Pawlenty said.

Jokes aside though, Pawlenty publicly says he is seriously considering a presidential bid. He recently told journalists that he will make a decision in the coming months.

Pawlenty is only one of two Republicans whose names are tossed around in the presidential guessing games to attend the Hispanic outreach event. The other is Jeb Bush, the former governor of Florida.

On why he is participating in the event, and its importance to Republicans, Pawlenty said, "Well we want to make sure that as a party – and as a conservative movement, a center-right movement – that we're reaching out to people who are not yet on our team. And you've got to do that by showing up."

Pawlenty continued: "I would say the Republican Party needs to do a better job of reaching out to the Latino community and presenting our case in a more effective way. Not just by flapping our jaw, but also showing ideas that actually work."