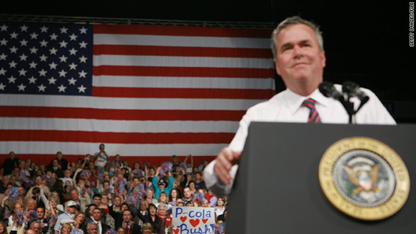 Coral Gables, Florida (CNN) - Jeb Bush believes that the tone of political debate in America has gotten too hot so he's urging a "restoration of civility across the board."

And Bush is critical of those who, he thinks, are unnecessarily firing up heated rhetoric. He's urging that "leaders have to lead," though Bush did not name any names.

The younger brother of former President George W. Bush, who's also mentioned as a possible presidential candidate, made the comments on Friday at the Hispanic Leadership Network Conference. The two-day event is being held in Coral Gables, Florida. Its purpose is to help Republicans court the nation's Latinos.

Bush is a co-chair of the event. Speaking to reporters, the former Florida governor echoed his recent, public comments about the growing influence of Hispanics in elections. But Bush also veered into the state of political discourse, explaining his long held belief that the atmosphere has grown more and more charged.

"Let me be clear: I don't think officialdom, in the Republican Party, has a tone problem. It's voices, not many of them, but loud voices that are picked up – and magnified by our friends in the media – that send that signal," Bush said.

"The more controversial you are in America – the greater likelihood your voice will be heard."

Bush later added: "After the incredible tragedy in Tucson, immediately – within 24 hours – there were people on the left and right back to the same fight. Kind of trying to assess blame rather than to mourn for the loss of people."

"You don't have to personalize your disagreements with people. You don't have to tear down the other person. Your ideas should have enough merit to be able to win the day. So I hope that the Tucson experience – the reaction to the reaction – helps us get to a better place politically," Bush added.

Bush was clear to say that the Tucson shootings were an unfortunate tragedy and no political voices can be blamed for it. This comes as Sarah Palin has been criticized for her political rhetoric and map that used crosshairs to zero-in on political opponents in the recent midterm election which included Rep. Gabrielle Giffords, D-Arizona. Bush told reporters that Palin bears no responsibility for the tragic events in Tucson.

But, while addressing the group attending the Hispanic Leadership Network conference, Bush talked about the responsibility of political figures - and those on TV - who have large followings.

"I have watched television...And sometimes I'm turned off by the tone, even though I agree with the particular view. Leaders have to lead. And that means they have a responsibility of civility, in my opinion, as well as having a tone that draws people towards our cause," Bush said.