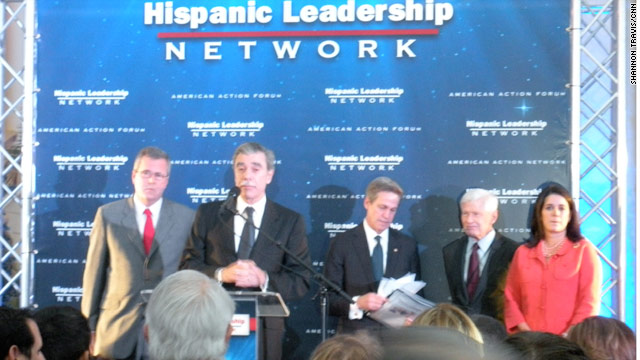 Republican conference to Hispanics: your home is with the GOP

Coral Gables, Florida (CNN) – How do you win over members of a group who may not like some things you stand for? You court them.

In the case of a national Republican group reaching out to the nation's Latinos, it doesn't hurt if that courtship includes a huge political kiss.

"This is not about politics, this is about the conservative cause," Bush told a small but supportive crowd at the conference kickoff at the swank Biltmore Hotel in Coral Gables. "And if you look over the horizon over the next 10 to 20 years…without the active involvement of Hispanics, we will not be the governing philosophy of our country."

Bush stressed that his party's philosophy centered on limited government, lower taxes, education reform and maintaining U.S. competitive edge – all items, he said, that makes the GOP a natural home for Hispanics.

CNN asked Florida's current governor if the conference is a tacit admission that Hispanics are either leaving the GOP or turned off by many of its policies:

"The Hispanic community clearly believes in the Republican principles," Scott replied. "The principle that family is important. The principle that… we all care about, Hispanics care about religion. They care about building businesses. They focus on the same things I'm focused on: limited government, making sure we don't kill jobs through regulation, through too large a government."

While conference speakers are placing heavy emphasis on areas where Republicans and Hispanics agree, few people are talking about areas where they do not.

For example, the DREAM Act would have offered legal standing to immigrants who entered the United States illegally as children – under the age of 16 – and have lived in the country for at least five years. Hispanic groups strongly urged its passage. But the measure recently went down in Senate defeat, largely due to Republican objections that the bill amounted to "amnesty."

Equally divisive are fresh efforts from a large group of Republican state lawmakers who want to stop the children of illegal immigrants - born in the U.S. - from becoming U.S. citizens. Many people point to the 14th Amendment's guarantee of U.S. citizenship to any person born in the United States.

Many Latinos staunchly oppose the efforts of the Republican lawmakers. Clarrissa Martinez, director of immigration and national campaigns for the National Council of La Raza, recently told CNN that such efforts represent "a new generation of Jim Crow laws."

It's likely that those issues help give Democrats a voting edge with Hispanics. In 2010, national exit polls show Latinos making up eight-percent of the electorate – with six out of 10 voting for Democrats.

Speakers and participants of the Hispanic Leadership Network conference are not lost on those numbers.

In a recent Miami-Herald op-ed, Bush called on conservatives to do better at reaching out to Hispanics. He noted several wins by Latinos in the recent midterm election.

Then former Florida governor wrote, "Despite this success among candidates, conservatives continue to get unacceptably low support among Hispanic voters nationally." Bush noted that "center-right candidates have failed to win more than 40 percent of the Hispanic vote nationally since 2004."

"While the reason for such low numbers is debatable, the way to turn them around is clear: a long-term commitment to outreach and better articulation of our values by conservative leaders."