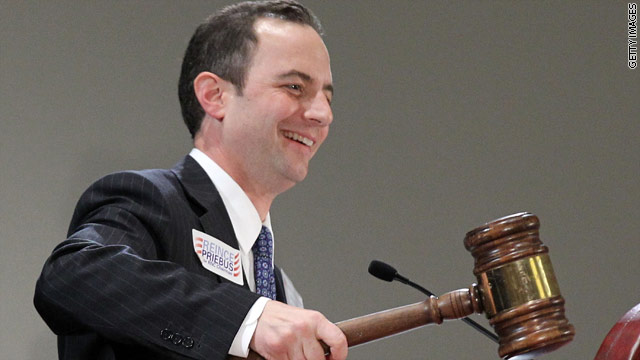 (CNN) - Appearing Saturday at a retreat for Congressmen in his party, newly elected Republican National Committee Chairman Reince Priebus spelled out his goals and philosophy in his effort to overhaul the committee, according to two GOP aides.

At the session in Baltimore, Maryland, Priebus said, "I believe what we need at the RNC, in my case, is less of self and more of everybody else," according to a House Republican aide.

Priebus, a former Wisconsin GOP chairman introduced to the group by Wisconsin Rep. Paul Ryan, told his fellow party members that he wants to earn their trust and build relationships in his first months on the job. He said that he would focus on paying off the debt accumulated by the RNC and establish regional finance chairs.

And, as one of his first acts of business, the new chairman said he plans to travel early next week to Tampa, Florida, to help turnaround that state's GOP operation.

"Reince can count on my support as we work to ensure that Republican candidates have the resources and the ground game needed to win the battle of ideas with President Obama and his Democratic allies," Boehner said in the statement.