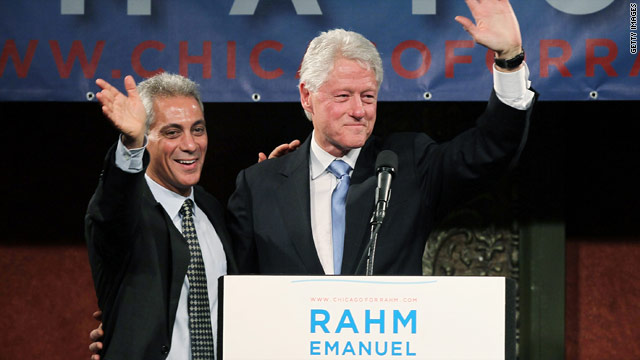 "You need a big person for the job. Now Rahm is not even six feet tall. He probably weighs about 150 pounds...but in all the ways that matters he is a very big person for this job," Clinton told a crowd of several hundred.

Emanuel was a key operative in Clinton's 1992 campaign and then became a senior official in his administration. He lavished praise on his former boss saying, "I cannot ask for a better role model."

After becoming a member of Congress from the Chicago area, Emanuel then left that job to become President Obama's first chief of staff.

Both Emanuel and Clinton used Tuesday's event to remind the audience of some of the key accomplishments of the Clinton presidency.

"You asked me to help pass a welfare reform bill, the crime bill, the childrens health care bill, a balanced budget, access to college education for middle class families, and I will bring that same determination and grit to address the problems facing Chicago," Emanuel said.

Clinton said Emanuel was "fearlessly honest in meetings...sometimes in very colorful language," a reference to the fact his former aide is well known for often using heated language in private settings.

The latest polls in the race show Emanuel with a commanding lead over his three Democratic challengers in the race but as of now not enough to avoid a run-off. If no candidate wins 50 percent of the vote in the Feb. 22nd primary, the top two challengers will face each other in a run-off.

While President Clinton is very popular with the Democratic base, his decision to appear with Emanuel was not welcomed by all.

"Bill Clinton doesn't live or vote in Chicago. He's an outsider parachuting in to support another outsider. For Clinton to come to Chicago on the day after Dr. King's birthday to inset himself into the middle of a mayoral race with major black and Latino candidates is a betrayal of the people who were most loyal to him. It's a mistake," Renee Ferguson, a spokeswoman for Carol Moseley-Braun, told CNN.

Moseley-Braun, a former U.S. senator and former Clinton administration official herself, is one of the three other Democratic candidates facing Emanuel in the primary contest.