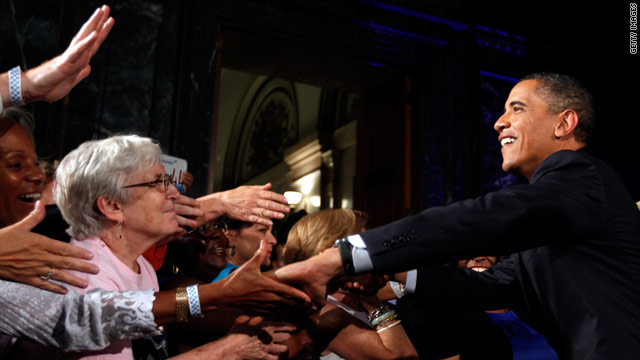 Washington (CNN) – President Barack Obama's approval rating is up five points since December as a growing number of Americans consider him a strong leader who is tough enough to handle a crisis, according to a new national poll. A CNN/Opinion Research Corporation survey released Tuesday also indicates that a jump in support by independent voters is behind the overall rise in the president's approval rating.

Fifty-three percent of people questioned in the poll approve of how Obama's handling his duties in the White House, up from 48 percent in a CNN poll that was conducted last month, as a very productive lame duck congressional session was nearing completion.

"Obama's approval rating among Democrats and Republicans is virtually unchanged since December, but among independents it has grown from 41 percent in December to 56 percent now," says CNN Polling Director Keating Holland. "It's possible that his call for greater civility in the aftermath of the Arizona shootings was seen as a boost for the bipartisan solutions that typically attract independents."

The survey indicates that 59 percent of the public now thinks the president is tough enough to handle a crisis - up six points from last year - and 57 percent now consider him a strong and decisive leader - a four-point gain.

"That may be an indication that the public is seeing Obama as more 'presidential' after his reaction to the tragic events in Tucson," says Holland. "The president's speech in Arizona last Wednesday night may have helped as well. Nearly nine in ten say they consider him to be a good speaker and communicator, roughly the same number who felt that way about Ronald Reagan in 1984, and his call for greater civility in politics wins near-unanimous agreement from the public."

On the other hand, Americans are not optimistic that he can achieve that goal - only a third believe that he can end the partisan gridlock in Washington. And his biggest Achilles heel remains his positions on the issues, according to the survey.

"The poll tested Obama on a variety of personal characteristics, and he gets high marks for honesty, sincerity, leadership skills and compassion. But most Americans say that they do not agree with him on important issues, and the public is split over the direction in which his policies will take the country," adds Holland.

Nonetheless, Obama's 53 percent approval rating at the start of his third year in office is six points better than Bill Clinton's at the same time in his presidency and 16 points better than Ronald Reagan's figure in January of 1983.