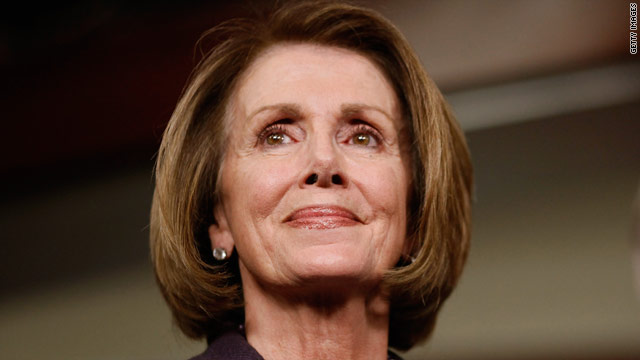 Pelosi on Dems: 'We'll be back'

(CNN)–Democratic leader Nancy Pelosi is confident about a Democratic majority in 2012. In an interview with CNN's "The Situation Room" anchor Wolf Blitzer, Pelosi reflected on the 2010 midterm elections, her ambition to move forward, and the possibility of a future Democratic majority.

"It's no use rehashing what happened before. We lost tremendous talent in our caucus and I'm concerned about that...We'll be back."

Pelosi also revealed details in the interview, which aired Tuesday, about her recent visit with Arizona Democratic Rep. Gabrielle Giffords who remains hospitalized in serious condition in Tucson, Arizona.

She spoke of emotion in the room when she visited at the invitation of Gifford's husband astronaut Mark Kelly stating "his view is that... she was so happy we were there, she had to open her eyes to make sure it was true…it was personal…But when she opened her eyes she gravitated right to her husband."


Pelosi also described watching Giffords respond to questions from her husband by opening her eyes. "It wasn't just that we imagined it. You could see the beautiful blue eyes–one–when she opened her eyes."

When asked about whether former Alaska Governor Sarah Palin has been treated unfairly in the wake of response to the shootings in Arizona, the Democratic leader responded that she has "no idea" and asserted that "the conflict over who said what about whom... is really not important." Instead, Pelosi believes that "What is important is that we give our energy to those families that have been affected."

As the repeal of the health care reform law is being debated, the minority leader said she thinks that "the law is a very good law" and "no law is perfect."

"You're always open to legislation. This is not theology. It's not ideology... This is about patient's rights, not about the health insurance companies' profits," she continued.

Looking ahead, Pelosi also relayed confidence regarding a House vote to repeal health care that is set to take place tomorrow.

"We will have a very overwhelming vote to say no to repeal, and some who voted against health care will vote against the repeal."