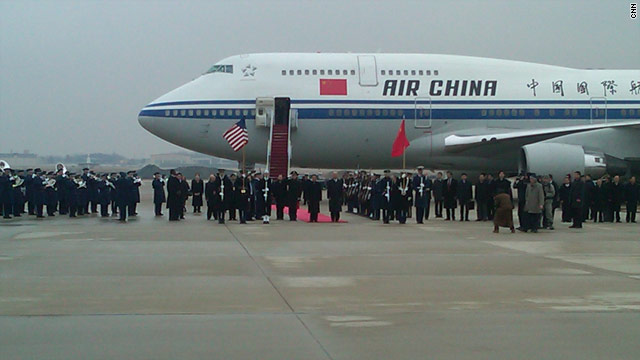 Andrews Air Force Base, MD (CNN) - The white 747 with blue stripes and adorned with a flag landed at Andrews Air Force Base Tuesday afternoon, bringing a president to Washington. But this time it was an Air China jet stopping in Air Force One's usual parking spot, to begin an official state visit by President Hu.

The real story of the Hu visit will be the serious topics up for discussion away from carefully choreographed ceremonies: trade, currency, and security. Each is an issue without easy answers. But even with one of America's most complicated relationships, policy talks start with protocol.

The visit opened under dark skies on a chilly and drenched tarmac, with Vice President and Mrs. Biden leading the eight-member welcoming party that greeted China's leader.

As the 747 turned off the runway, a military honor guard took up its position. Across the wet concrete, a red carpet was rolled out just before the doors opened and American and Chinese delegations lined up below the stairs. The Air Force band struck a welcoming note as Hu stepped out into 37-degree air. With every step planned, Hu shook hands with Biden and the greeters at the base of the plane.

The visiting leader hugged a child as he and Biden worked the lines. With the honor guard standing post on both sides, the two walked to the front of the red carpet. The Air Force band played the Chinese national anthem followed by the Star Spangled Banner and both delegations stood at attention.

The American delegation included Ambassador Jon Huntsman and his wife, Mary Kaye; U.S. Chief of Protocol Capricia Penavic Marshall; and Colonel Lee DePalo, the 11th Wing Vice Commander at Andrews Air Force Base. In attendance on the Chinese side: their ambassador to the United States, Zhang Yesui; the Chinese Foreign Minister; the Minister of Finance; and embassy staff members.

Hu then climbed into a limousine affixed with a Chinese flag on its left front and an American flag on the right. With a full motorcycle escort, the long motorcade headed to Washington where Hu's first event is a private dinner with President Obama Tuesday night.

The short ceremony was a precursor to the real pomp and circumstance scheduled to take place on Wednesday. A formal state welcome will greet Hu before a day of meetings at the White House. Hu will also be the guest of honor at a State Dinner Wednesday evening, the third of President Obama's administration.