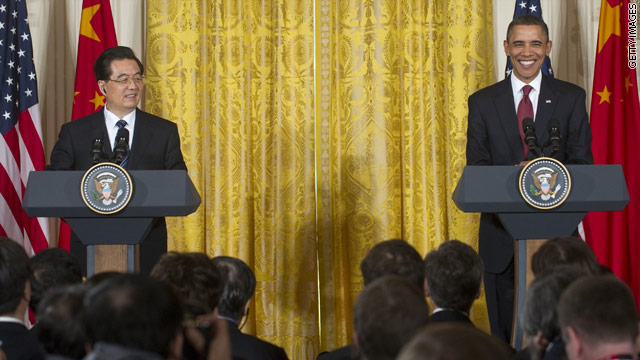 A lost in translation press conference

Washington (CNN) - The joint news conference with the two presidents started off just fine. President Barack Obama praised a "spirit of cooperation that is also friendly competition." President Hu Jintao told reporters the countries' relationship is based on "mutual respect and mutual benefit."

Then came the "lost in translation" moment that turned the press availability into what felt like one long Chinese-language lesson.

It started when both presidents were asked about human rights in China. Mr. Obama answered but, in a confusing moment, Mr. Hu did not. Instead, the translator began translating Mr. Obama's answer. Then they went on to another question. So another U.S. reporter asked the human rights question again, hinting the Chinese president might have tried to avoid it.

President Hu was not amused: "First, I would like to clarify, because of the technical translation and interpretation problem, I did not hear the question about the human rights," he said. "What I know was that he was asking a question directed at President Obama. As you raise this question, and I heard the question properly, certainly I'm in a position to answer that question."

For long stretches in the press conference the two leaders stood by, awkwardly waiting for the translation.

At one point, a Chinese reporter chimed in, chiding the translators: "Because of the on-and-off interpretation from the simultaneous booths, I would like to ask the Chinese consecutive interpreter to interpret my two questions correctly and accurately."

When it was all over, Mr. Obama, his Mandarin language lesson over, apologized: "All right, everybody. Thank you so much for your patience, due to the technical difficulties."

The White House later told CNN that it was the Chinese who requested the type of translation used: "consecutive" in which the speaker says his piece, then waits for it to be translated. All it requires, it seems is a little patience.