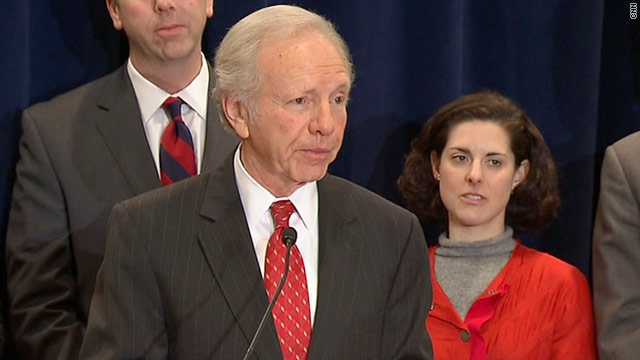 (CNN) – Sen. Joe Lieberman, the independent from Connecticut, announced Wednesday that he will not seek re-election, telling reporters at a midday press conference "I have decided that it's time to turn the page to a new chapter."

"I've loved serving in the Senate and I feel good about what I've accomplished. But I know that it is the right decision, and I must say, having made it, I am excited to begin a new chapter of life with new opportunities," said Lieberman Wednesday.

The move by the four-term senator caps off a roller-coaster political career in which Lieberman came a hair short of becoming vice president in 2000 before epically striking out at his own bid for the presidency four years later and then losing his party's senate nomination a mere two years after that.

Lieberman, once among Connecticut's most popular politicians, has also seen his poll numbers dip precipitously over the last two years and political observers have long predicted the four-term senator would have had a steep climb toward reelection.

The decision is somewhat of a surprising one given Lieberman's ongoing appeal with independent voters and the respect, however tepid, he garners from both sides of the aisle.

While Lieberman is now an independent, he has aligned himself with the Democratic leadership for organizational purposes, a move that helped boost the Democratic majority on key issues like health care reform and most recently the repeal of "Don't Ask, Don't Tell."

At the same time, Lieberman has endeared himself to Republicans with his early condemnation of President Clinton during the Monica Lewinski affair, his strident support of the war in Iraq and his endorsement of Arizona Sen. John McCain in the 2008 presidential election.

But Lieberman's "party of one" status has at times frustrated Democratic leaders and the liberal wing of the party, leading one Democratic source to privately express a "sigh of relief" the senior senator is departing. At the same time, Lieberman was never fully embraced by the GOP given his relatively liberal voting record and reluctance to seriously break from his former party more than only a handful of times.

"I have not always fit comfortably into conventional political boxes, maybe you've noticed that. Democrat, Republican, liberal or conservative. Because I've always thought my first responsibility is not to serve a political party but to serve my constituents, my state, and my country," Lieberman also said Wednesday.

Ultimately the move adds further murkiness to Democrats' hopes of hanging on to its slim majority in the Senate in the 2012 election, especially coming on the heels of a similar retirement decision by Sen. Kent Conrad, a Democrat from North Dakota.

The race for his seat is wide open and the state's Senate race in 2010 showed a well-funded Republican has more than a decent chance of wresting control of the seat from Democrats. Still, Democrats are quick to point out President Barack Obama will be on the top of the ticket in 2012, boosting turnout among the party faithful.

Earlier on Tuesday former Connecticut secretary of state Susan Bysiewicz announced that she is planning to mount a bid while Reps. Chris Murphy and Joe Courtney are also thought to be considering campaigns of their own. Meanwhile, various Republicans are mulling their options.

A Lieberman aide stressed that the senator made his own decision some time ago and it was not influenced by Bysiewicz's announcement Tuesday or any other maneuvering.

"I do not intend today to be the end of my career in public service," Lieberman said. "I will keep doing everything in my power to build strong bridges across party lines."

Ultimately though, Lieberman offered few hints about his future plans. But McCain, perhaps his closest friend in the Senate, has at least one suggestion.

"I really hope that the president would consider [for Secretary of Defense]," McCain told CNN. "I sure hope, whatever happens, he will play a major role on national security issues."

- CNN's Dana Bash and Ed Henry contributed to this report