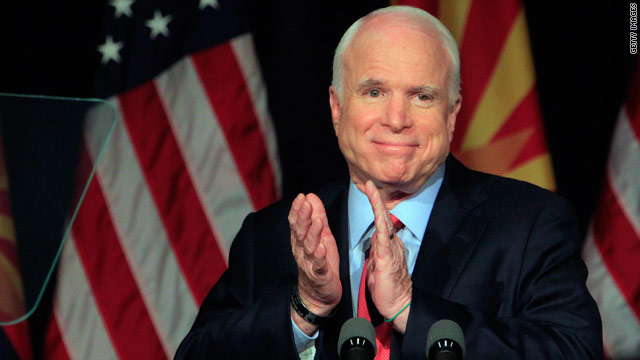 Washington (CNN) - Sen. John McCain, R-AZ, tells CNN he believes his good friend Joe Lieberman would make a good defense secretary for President Obama, calling him "one of the most informed members of the Senate on national security issues and homeland security issues."

McCain was answering a question from CNN in a telephone interview about whether the president should consider picking Lieberman for the post, since Defense Secretary Robert Gates has said he wants to leave this year.

"You know its funny you mention it," responded McCain, "I really hope that the president would consider him. I hadn't thought about it but I sure hope, whatever happens, he will play a major role on national security issues," said McCain.

Lieberman, who already had a rocky relationship with Democrats after running for his Senate seat in 2006 as Independent after losing a Democratic primary, angered many in his former party by campaigning constantly with McCain in his 2008 presidential bid.

Fury at Lieberman erupted in Democratic circles when he spoke at the Republican convention and not only expressed support for McCain, but also said he did not think Obama was ready to be president.
McCain suggested that shouldn't stop the president from considering Lieberman for his cabinet now.

"I know one thing, that the president has reached out to people that otherwise, maybe a couple of years ago, he wouldn't have given serious consideration," said McCain, "but I can't divine the views of the president."

With sadness in his voice, the Arizona Republican called Lieberman "the most decent man that I have ever known in the Senate. He lives his religion and is the most generous spirit."

"He's not going to go into retirement, he just wants to do other things, and I'll miss him every single day," said McCain.

McCain said that Lieberman told him that he is "tired" after 40 years in public service, and admitted that "he knew he had a tough re-election fight" had he chosen to run for a fifth Senate term.

McCain said he will miss their close friendship and camaraderie in the Senate, but also said Lieberman's retirement will create a "vacancy on national security issues, the Middle East in particular."

In his 2008 presidential campaign, McCain came close to tapping the 2000 Democratic Vice Presidential nominee as his GOP running mate.

"Certainly he was very seriously considered, and we chose Sarah Palin instead, but certainly had our most serious consideration and a lot of that had to do with my friendship and respect for him," McCain recounted to CNN.