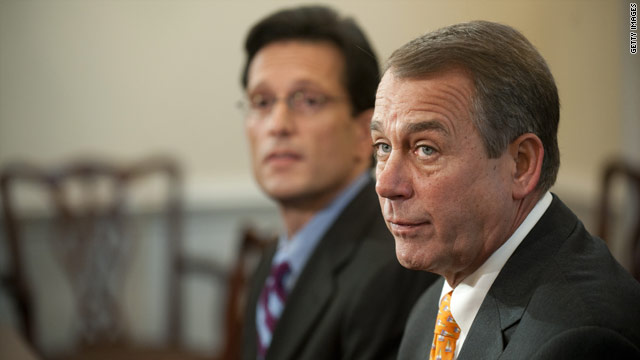 Washington (CNN) - As the House of Representatives moved forward with a vote on Wednesday to repeal the health care law, House Speaker John Boehner said there is no set timeline for a vote on an alternative to replace it.

"I don't know that we need artificial deadlines set up for the committees to act," Boehner told reporters after the weekly Republican conference meeting, adding that the House will vote to instruct the committees to begin working on a replacement on Thursday. "We expect them to act in an efficient way, allowing all of their members on their committees to be heard, both Democrats and Republicans."

Asked what the law should be replaced with, Boehner said "common sense reforms that will bring down the cost of health insurance for the American people and expand access."

House Majority Leader Eric Cantor urged the Democratic-led Senate to follow the House action and allow a vote on the Senate bill.

"Leader Reid continues to say that he is not going to bring this up for vote in the Senate. The American people deserve a full hearing, they deserve to see this legislation go to the Senate for a full vote," Cantor said.

Cantor declined to say whether he thought there were enough votes to pass the bill in the Senate, but said "the Senate ought not be a place that legislation goes into a dead end."

Senate Majority leader Reid released a statement on Wednesday saying, "This is nothing more than partisan grandstanding at a time when we should be working together to create jobs and strengthen the middle class."