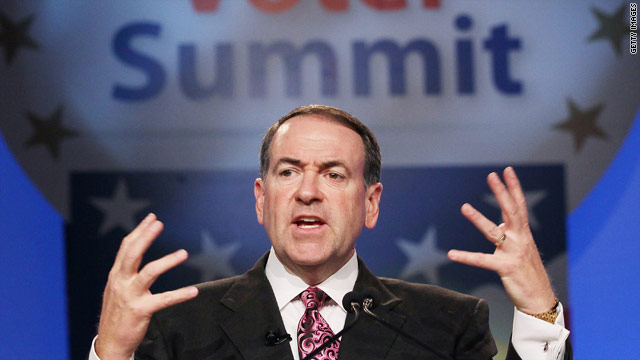 Washington (CNN) - Mike Huckabee will visit six cities in Iowa and five in South Carolina during his upcoming book tour – one more sign that the former Arkansas governor wants to keep his name in the presidential mix for 2012 even as he enjoys the comforts of a lucrative talk show career.

The tour to promote his new book, "A Simple Government," kicks off in Davenport, Iowa on February 27 and will take him to five more cities in the first-in-the-nation caucus state over two days: Dubuque, Waterloo, Cedar Rapids, Iowa City and Des Moines.

Huckabee will then travel through other states in the Midwest and south before heading to South Carolina for a two-day, five-city swing beginning on March 7. He'll sign books in Florence, Columbia, Anderson, Greenville and Spartanburg.

That means Huckabee will be spending more than a quarter of his 40-city tour in two states that play a major role in determining who the GOP presidential nominee will be in 2012.

Huckabee enjoys a robust grassroots following in both states dating back to 2007, when he entered the last presidential race as a long shot but rode a wave of evangelical support to a first-place finish in the Iowa caucuses and a narrow second-place showing in the pivotal South Carolina primary.

Notably, though, the book tour will force Huckabee to skip what could be the first serious gathering of 2012 presidential contenders in Iowa – a March 7 forum in Des Moines hosted by the Iowa Faith and Freedom Coalition.

None the invitees have publicly committed to attend, but Steve Scheffler, the coalition's president, told CNN that several candidates have privately said they will participate.