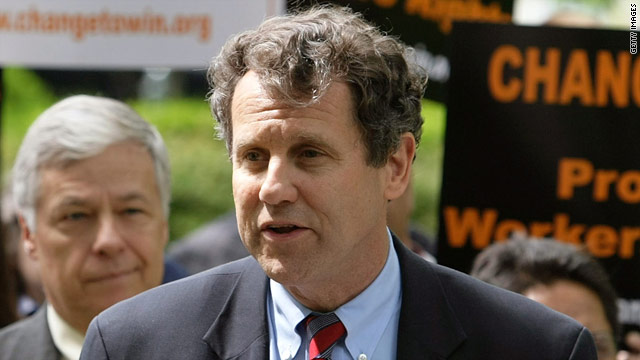 Washington (CNN) - By a 45-30 percent margin, Ohio voters say Democratic Sen. Sherrod Brown deserves to be re-elected in 2012, according to a new poll.

Forty-five percent of people questioned in the poll say they approve of the job Brown is doing as senator, with one in four saying they disapprove. In a matchup against an un-named Republican candidate, the poll indicates that Brown leads 45 to 33 percent, with independent voters divided.

"Sen. Sherrod Brown starts off his 2012 re-election campaign in decent but not overwhelming shape," says Peter A. Brown, assistant director of the Quinnipiac University Polling Institute. "He'd like to be above the magic 50 percent threshold, but he is within hailing distance."

According to the survey, by a 49-46 percent margin Ohio voters approve of the job Obama's doing in the White House, reversing a negative 45 to 49 percent margin last June. And 44 percent say they'd vote for Obama in 2012, with 39 percent saying they would support an un-named Republican candidate.

"Given the shellacking Democrats took in the November election both here in Ohio and around the country, both Sen. Brown and President Obama begin their 2012 campaigns in reasonably good shape," adds Brown.

The Quinnipiac University poll was conducted Jan. 12-17, with 1,299 registered voters in Ohio questioned by telephone. The survey's overall sampling error is plus or minus 2.7 percentage points.